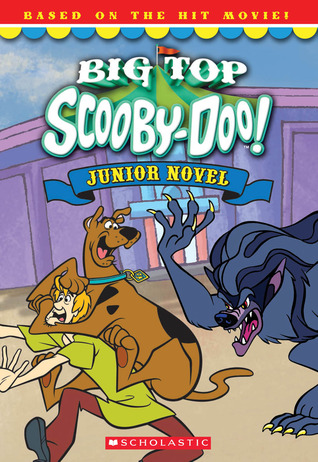 I just love Scooby Doo, seen all the series/movies (still hoping that Be Cool, Scooby Doo will start airing again) so I was really eager to start with this one. And it was oh so much fun.

So this time our team is heading to a new city, but they get side-tracked by the circus. Or well, Fred gets side-tracked and pushes his team with him to go to the circus, and from that moment our team is stuck at the circus, solving yet another mystery. This time involving a werewolf and stolen jewels. Who is the mystery werewolf, and what is happening around the circus?

Of course our team helps out, that is how they work. I just love how they never pass a case, they will always try to solve it. Even if it is a bit scary. 😛

It was fun to see all the circus acts, but even more fun to see our team participate in the acts as well. Daphne and her act was the biggest surprise to me, and I was kind of worried about Velma and her act. Couldn’t she have just helped behind the scenes?

The werewolf, and later werewolves, and the mystery. I just loved that part. I had lots of fun trying to follow the clues, figure out the whodunnit, and if it was really x or if it was someone totally different.
We also have a twist at the ending, a really well done twist. I was already thinking it was just a bit too easy, but indeed, there was a catch, and thus we had a fun chase!

The only thing I would have liked to see were illustrations. It would have made the book even more fun.

Oliverio and Lena, well especially the first person. He was just a bit too obsessed with his wife, and I hated how he immediately assumed and threatened any male person even daring to blink at her. You have some serious issues dude, maybe go to a therapist to talk about that. 😐

Also I found it a bit too unbelievable that Scooby just could do anything. Even in the series/movies he isn’t that awesome/amazing. At times I wanted to call Scooby Scrappy instead. I also hated how Scooby treated Shaggy. He wants to have him be respectful to him, but doesn’t do the same back to Shaggy. Bleh.

But all in all, this was a fun book, and I would recommend it.