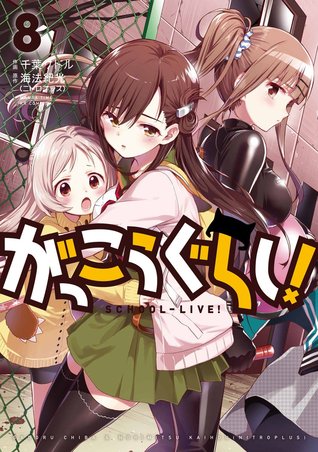 Doing a re-read of this volume and #9. Lots of talk, but also lots of action (at least in the end) in this volume.

This may be a bit chaotic, so bear with me. is still tired from staying up late to read The Truth About Happily Ever After

Not a new read for me. I am following this series. Each time a chapter comes out I read it. But I decided to re-read this volume and the next one, for 1 reason. Since there are quite some exciting events coming up, and I want to freshen up my memory.

This was one was a bit boring, at least in the beginning. Sorry, while I will still rate the volume high (5 stars), I still miss the old volumes. The ones in which our group was just our group. They were living at their school. Now they are at the university and while a lot of things are going right (hence me being bored a bit, I come for the zombies), there is still enough that will end badly. There is a lot of tension between the two groups that already live in the school, and add to that the Kurumi is going slowly, but steadily, towards being a zombie. Add to that Rii-san and her “sister” (which indeed was “solved” in this one, though I think everyone who reads this one knew it already). I did quite like that Rii seems to slowly realise THAT about her sister. It is still locked up behind a wall in her memories, but I hope that she will one day face whatever is lurking in that memory (though we can already guess).

Of course there are still mysteries about the zombie virus (though in the latest chapters that I read we have had quite a few answers). In this manga we see a guy infected walking around, yet, according to everyone, he never suffered wounds, or any other obvious signs that he would become a zombie. Of course, people panic. I would do the same if someone just became a zombie without showing any of the signs or being bitten.

I am not sure if I approve of what Kurumi did. She had to do it to save her life, but I am not sure if I like it. I am worried about Kurumi as well. The medicine worked up to a point, but it seems she is now really going the wrong way. She is still maintaining some form of humanity, but I wonder for how long.

The latter chapters in this volume are all about that one group undertaking action. Which made me dislike them even more. It is true what they say, in the zombie apocalypse it isn’t the zombies who are the deadliest. Oh no, it is the survivors. Some just go a little bit craycray in their minds (and no, not in the way that Rii or Yuki do, but something much much worse).

Ah, yes, this volume ended on a cliffhanger. I still remember that, so typical of the author. 😛

All in all, I will be re-reading volume 9’s chapters as well, and I will probably write a review for that as well. I do wonder how long this series will go on for. Given the latest chapters and what happens there, I think we still got a long road to walk/stumble before the end.