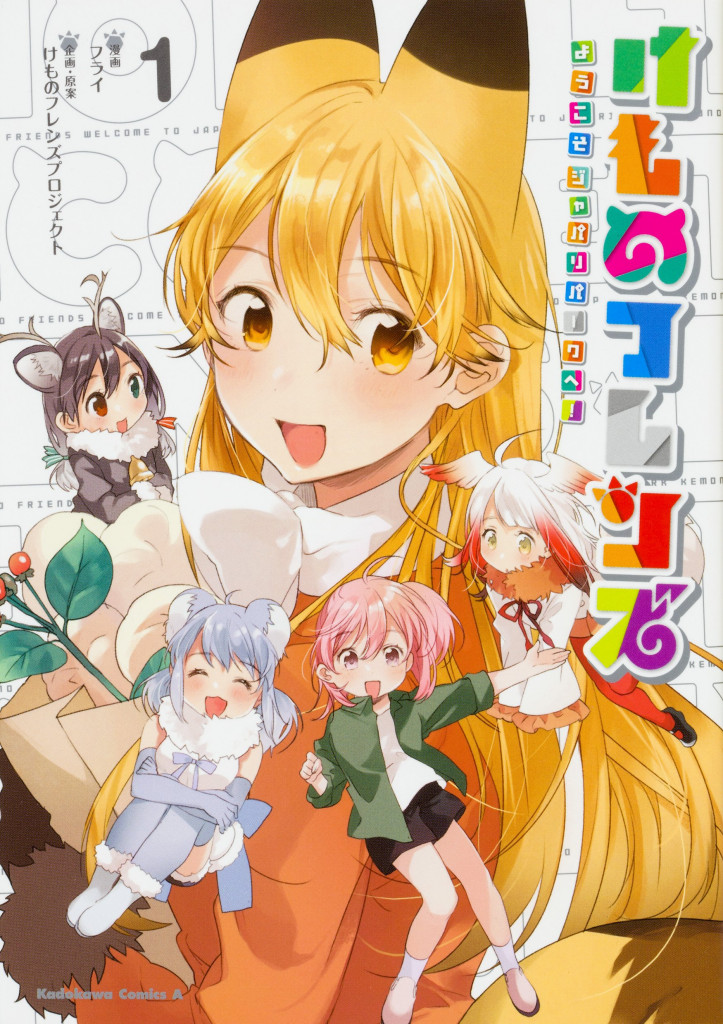 This is going to be a review for both the volumes (yes, sadly the series is only 2 volumes).

So I watched the anime for this one some time ago, at first I wasn’t sure what to think of it, but then I had another go at watching it, and well.. I just fell in love with the story, the idea, and the characters.

A world with animals who look like humans. They live in a park named Japari Park. Though don’t think that this is just a small park. Oh no, it is gigantic with various regions, and even a town. It seems that Friends (as they are called) are only female. So far, in anime and manga, I haven’t seen any male Friends.

The anime and the manga are vastly different. Which definitely made it very fun to read this manga. The characters were the same (well the characters that we also saw in the anime), not only in how they acted, but also how they looked. It was definitely fun to see them again. Of course there are differences, but I can’t really go into that as that would spoil the anime.

Squee dies of cuteness. This was just super adorable. It was slightly different from what I expected, I thought that this would solely be about Nana-chan and her job as caretaker, but instead we have stories with and without her. And I loved that! Of course I wouldn’t have minded the stories to be all about Nana, but this way we learned more about the Friends, and we saw them in situations without the caretakers. We see them form friendships, but also find out about other Friends. And at times it was hilarious to see how they tried to get along, but it didn’t work out well due to the various reasons. For instance the whole pap thing. No, you will have to find out yourself what that is. 😛

Some stories are super-short, but we also have a few longer ones.

We meet all sorts of Friends, new and old, and I like most of them. Red Fox took a bit of getting used to and I know I am still a bit annoyed at her rudeness, but by now, more often than not, I am laughing at her antics and her very big love for food.
I loved that we meet several new characters, it was great to see the Friends world expand even more.

The art is gorgeous/adorable, though it reminds me of the art style of Gakkou Gurashi.

All in all, I would definitely recommend these 2 volumes. You will laugh yourself silly, you will start to love those silly/weird girls named Friends, and you will want to learn more about them.