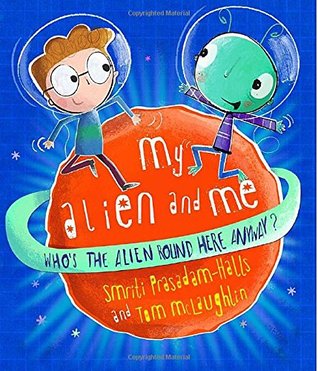 My Alien and Me, totally not what I had expected while looking at the cover. 😛

Generally, when the title and the cover is like this, it means something landed on our planet, but in this book they flip it around. A little human boy crashes on a strange planet, and one of the aliens (or are we the aliens now) takes him under his wing.

It was quite fun to see how the little human was trying to adapt to the life on the planet, and to also see what the aliens did on that planet. Though I did think the alien was a bit rude. Yes, he isn’t doing all those things as well as you do, but is that any wonder when he never did any of those things? And when those things aren’t things he does normally?

I was a bit surprised that we never see the ship get fixed, but when the kid goes back to his ship it is magically fixed (with a bandage it seems). Oh well. 😛

The ending was cute, I wouldn’t have minded to see an epilogue with how the aliens do on Earth.

The illustrations are pretty good, I quite liked the style of them. It fitted quite nicely with the story.

All in all, I would recommend this one to everyone.