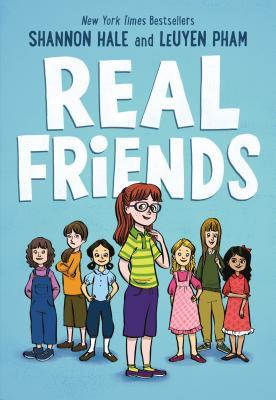 Yes, even though the book isn’t supposed to be out, Amazon already send me my pre-order and I received it today.

This was brilliant, just as I hoped this would be. Shannon Hale is one of my favourite writers, so I was delighted that she wrote a memoir in the way of a graphic novel. It tells all about her childhood, about her family, about friendships, about anxiety, and much more.

I loved Shannon’s imagination, when things got tough, or just while playing with friends. She thought of the most wonderful stories. She was destined to be writer, to write down those stories that came to her.

Her home situation, especially Wendy and how she treats Shannon was pretty severe. I didn’t quite like how the mom just stopped helping/mediating between the two of them. Because she felt it would only make it worse. So you just let your oldest daughter hit her sister, say terrible things about her? Even in presence of friends? What? No. Just no.

The situations at school did seem quite familiar to me, I may not have had a big group of people, but I did have a best friend and she was also just like Adrienne.

Jenny turned out to be quite the nasty person. Spreading lies, making sure that Shannon wasn’t liked in the group, purposely hiding appointments or things the group agreed on. I was really happy with how Shannon handled it in the end. Go girl! I am sure if you had answered yes she would just have continued ruining your life.

At times, and this is probably because I am reading this, and not actually being there, but at times I could see when situations would end up wrong. The girls would be talking about x topic, and Shannon would bump in with something of her own. For instance making a joke. At times it worked, but at times it just didn’t.

You can also see the anxiety that often ruled Shannon’s life. From counting the stones in the hallway, to counting trees. To stomach aches. In that way her mom was pretty awesome, she noticed something was wrong and tried to help her daughter out.

The ending was really sweet, and I was happy with how the book ended. I also liked the ending notes by Shannon Hale. How she explained about the book, about several events, about characters. That definitely added something extra to the whole book. She also added some of her childhood photographs.

Of course the book is entirely illustrated by LeUyen Pham, I am really happy she illustrated this book, as I love her other works she does for Shannon Hale.

All in all, a highly recommended book.