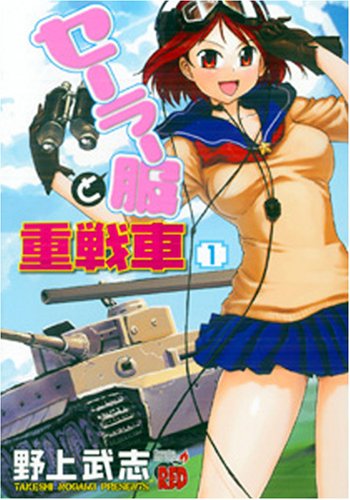 My first reaction to this one was: Oh, Girls und Panzer has another series, just a different character. is excited

My second reaction, upon finding out that was written/drawn before GuP by the character designer of GuP, OMG more tanks! And OMG the mangaka of this one also worked as Character Designer in the GuP series. squee

This is pretty much GuP, just with slightly uglier art (sorry, but it is the truth) + fanservice. Lots of underwear is shown, several times our MC’s has her boobs groped, and then I am not even talking about coughcertain scenescough.

Each chapter is a new opponent. They range from thugs to girls. I do have to say I was a bit bored, after 2 chapters I could easily predict the outcome of the next chapters. Which is such a shame. But next to the predictability it was fun to see the girls try their hardest to win. They did so in fun, hilarious, and over the top ways. 😛

I am quite curious about a world that apparently doesn’t mind teens riding in tanks (or better said, that allows anyone to just get a tank and drive around with it), even holding battles.

I am not really happy with that one scene in this volume. Heil Hitler and making that hand gesture is just a big no no in my book.

The art is OK at best, and ugly at worst. Boobs that magically grow humongous. Eyes that look more yandere than normal. And so I could go on. The tanks are quite detailed though. 😉

All in all though, I will keep on reading this series. Even with its flaws it was quite a fun read.