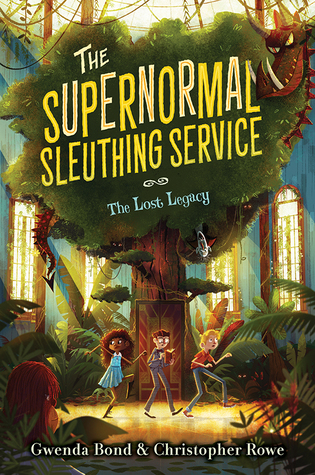 This book was amazing, not only the story, the characters, but also because it brought me out of a reading slump! I have been in one for 10 days, I did read during that time, but most of the books I read were miss. And I am not even talking about the amount of books I tried reading during that time.

The premise alone sounded perfection, but in the end it turned out to be so much more. The hotel is wonderfully described, I could just imagine myself there. Walking through the halls that can be changed at a whim (or in most cases, on the demand of a guest), talking to the elevator (who was a bit annoying at the beginning, but he turned out to be a wonderful, sweet, kind friend for life), seeing all the different supernormal guests. There is no end to what you may encounter in the hotel. Mermaids, ghouls (God, if I saw that guy I would have an heart attack, Silent Hill much?), vampires, fae, and much much more. Anything imaginable can be found here.

I loved how our MC went from normal to something more in not quite fast, but how it all felt naturally and normally. Or rather, the progress, the turning was fast, but then it just slowed down and we gradually find out more and more about the hotel, about the owners, about our MC’s legacy and what that means. Also I just loved that our MC himself was a supernormal, or a half/half one at least. It gave certain limitations, and new rules that he also had to follow. Plus it also brought new things in the mix. Like his ears. Or talents. Or how being a halfsupernormal works.

The MC was a pretty decent kid. I have to say it took me a bit to like him. I found him at times a bit harsh, and at other times a bit too much of a rule breaker (yes, we do find out why he is having a hard time with rules, but really, you would think he would at least try a bit harder). But his harshness softened, and also I could understand why he was so angry. I would be angry too if I would find out that everything my grandmother told me was the truth, and that my dad hid a WHOLE LOT of details from my life. Including a very big secret about my mom.
We see them tip toe and try to regain some semblance of father and son bond throughout the book. It isn’t an easy progress, and only made worse at times when his father doesn’t believe and trust him.
Stephen is a brave kid though, I loved how he kept going, even though it was very dangerous at times. He stood his ground, he didn’t waver, and that takes guts. A lot of other people would have run if they saw a vampire for the first time, or well, even any supernormal.
I did worry about his confidence, at times I just wanted to shake him to tell him that people really did care about him, that his dad still loved him, that his new friends are really his friends and that they will not just drop him.

Ivan and Sofia? It took me a long long time to get used to both of them. In the end I can say that I really like them, and they are kind, sweet, and true friends, but it took me some time to establish this. Quite often I wasn’t sure about their friendship and feelings.
I loved how they complemented each other, and also Stephen. Sofia is kick-ass and will probably defeat you in any match, whereas Ivan is more logical, brainy. And then there is Stephen who is brave and creative. They make a great team.

There is a lot of sleuthing, and I was also looking back and forth to see if I could see what happened to the book. I knew quite soon who took it, and also the why, but it was still a delight to read and see the characters figure it out.

You could definitely see a rift between the adults and the children. The adults were all eager to do it diplomatically, even if that meant it took ages. Whereas the kids just wanted to solve the mystery and have everything fixed before the day ended.

I loved the idea of a cooking book (and a cook) for supernormals. The recipes seem intriguing (we get to see a few of them), and I can just imagine the taste is supernatural/out of this world.
It was also interesting to see that the supernormals didn’t like normal food.

Then there was a moment near the end that just brought tears to my eyes. I was just nodding my head and squeeing in happiness.

I was a bit pissed at the way that people treated Stephen. When he was accused, but also later, his half fae-ness is being treated as if it is bad, and I was angry. Very angry. This is a kid, he just found out about him being a fae, and instead of you all helping him transition and ease into this new life, you call him names, tell him he lies, and so much more.

There was just one big thing I didn’t like, well… sure, I liked them in a way, but they didn’t match my image of the characters, and that was the illustrations. Yes, they were really pretty and I loved the attention of details, but I was stunned when I saw the characters for the first time. They were totally different from what I read in the descriptions, and how I imagined them to be. With the introduction of the dad I was just looking around for another character, but instead it had to be that person…
This is quite a rare occurrence, often I totally agree with the illustrator’s view of the characters, the world. So that was quite jarring as there were quite a few illustrations featuring the characters throughout the book.

I am sure that I could go on and on about the book, but I will keep it at what I have said here. I would highly recommend this book to everyone. It is magical, fun, has a great cast of characters, and I wish I could visit the hotel myself. Go through the portals. Visit different worlds.
I hope the next book will come out soon, I need more of this series!