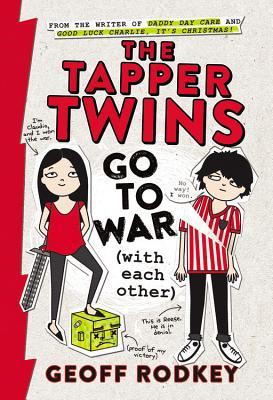 This book is all about Claudia and Reese, and the war that escalated from a small thing to something enormous. Something that got the two of them in big trouble.

Claudia is the one writing everything down, in a script-ish way, and we see interviews with her friends, with Reese, with her parents, with everyone that had something to do with this war. Not only that but we also see text messages, comments from sites, photographs (with comments), and much much more. I am not always into books like this, often it feels weird, but in this case I just couldn’t stop reading, and I think this is definitely the best format to document the war that took place between them.

I am not entirely sure if I liked the twins. Claudia had some good points and she was quite a fun character, but she was such an Hermione (in other words thought she was better + didn’t mind rubbing her smartness into other people’s faces). While Reese had some kind traits and he did seem to care about his sister deep down, but mostly was a rude, stupid boy.

It was quite fun to see how the war escalated. How it all started with that toast, but then ended in full destruction. And how no one really had a clue it got this bad until it was way, way, way too late to stop. There were some moments that had me shaking my head. Mostly to do with the parents’ reaction to it all.

Yes, the parents. I am not sure if I think they are good at parenting. They aren’t really around much, plus going by their texts, I doubt they have a clue how to handle the twins. And that is such a shame. I feel that this whole war could have been prevented, or at least wouldn’t have gotten out of hand so much, if the parents actually got together, with the kids, and just talked it over.

I quite enjoyed this book, and I hope my libraries will one day have book 3 and book 4 in their catalogue, I really want to see what the twins will be up to in those books.

I would recommend this book if you are looking for a fun, hilarious book.