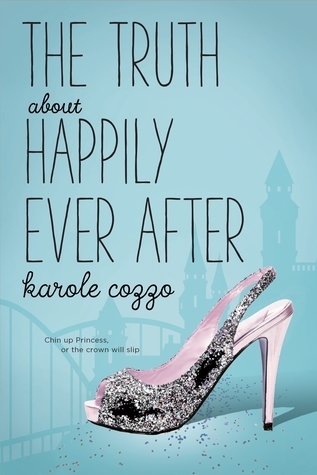 So, my plan yesterday was to stop reading at 63% and then go to bed. That 63% turned to 73%, and then eventually I just read all of the book. It was just that good and I just had to finish it.

I have to say at first I was worried about that last part of the blurb, but it turns out I didn’t have to worry. It was just perfection.

Alyssa was my BFF in this one, she was just an incredible girl with big hopes and dreams. I loved her from the first page, and as she grew as the book progressed (because grow she does) I loved and respected this girl even more. Some may call her superficial, but I think she is dedicated and a wonderful girl. She really wants to be a Cinderella, she really wants this job, and she will do anything for it. Even if that means drinking coffee/wine through a straw (because white teeth!), or making/eating food that is light on calorie intake, or even working out when she doesn’t feel up to it. I have to say I was worried about the food intake at times, it seemed so little, but thankfully this girl at times just lets the regime go and eats a bit more. She definitely found a good balance in her life. Yes, she is skinny, but (up until that part at least, and then it wasn’t because of how she measured her calories) she isn’t a skeleton. Her work won’t allow for that. She still needs to be a healthy weight that fits with the Cinderella part.

She also isn’t afraid to give her opinion (go girl!), she tries her best for Jake (even though I just wanted to through him in some kind of pond), and she is hard trying to find her way in life. She doesn’t really have the easiest life now that her family is poor. I was pretty amazed to learn all the things she does for her sorority. However, I do wonder how long she is going to keep it up.

Then there were many more other times that I just loved Alyssa. I will just keep it to what I said for now, otherwise the review will just get super long.

Yes, at first I was frowning at a workplace that would demand their girls to be a certain weight/structure, but then, when shit hit the fan, the person who checked the girls even expressed her worry and even said that Alyssa should eat something. 😛 That clearly shows that even though they have standards they still don’t want their girls to be superskinny.

I just love books about theme parks, about people working there. Especially when you learn of the dedication, the work, everything that goes into that. And if this is coupled with some realistic moments then count me in even more.

Jake x Alyssa, well, as you can see in the blurb it won’t end well. Then again, I was never shipping these 2. I despised Jake from the start. What a douchebag. You could just see that he was hiding something, that he wanted to tell Alyssa something, but he never did until everything exploded.
Jake was a dick. Jake was terrible. Instead of being honest right from the start (last year) he didn’t say anything, he just let it all grow and grow (at least for Alyssa).
There were quite a few parts that just had me shaking my head. For instance when Alyssa comes back from 14 hours of sorority sisters and she was completely knackered. Instead of just grabbing a movie, or going to bed together, they had to watch that video about his soon-to-be-job. Then he gets pissed when his girlfriend falls asleep within seconds. What? You could have seen this coming boy. But oh, no, it is all about you.
Or when Alyssa wants to look her best for her friend’s WEDDING, and is looking for a dress for more than 30 minutes. Yes, she is doing that during a time that they are doing something, but as Alyssa also states, it is not like Jake never texts, or does something else during such time either. But oh no, of course Jake doesn’t accept that and calls her superficial for looking at dresses that long. Whut?

I was definitely looking forward to the fireworks that would surely come. As not only there is the whole Jake-is-a-dick-stuff, but also the events happening between Harper and Jake. I just knew from the start what was going on, it is quite obvious. I believe everyone around Alyssa also saw it happening. Alyssa also saw it, and she was worried, but she just tried to keep on going. And I was hurting so much for her. 🙁 Sure, her fairy tale ending hopes might have been a bit overkill, but still this is not something I would wish on anyone.
So, yeah, I also hated Harper. 😐 What a snake. I can imagine you can’t stop such feelings, but at least try to stay away, especially when you know that the boy you like has a girlfriend. 😐

Miller? MILLLLLLEERR! Sorry, I just loved that guy soooooo much. He was just dreamy (though I have to say I didn’t see him with a beard). From the start when we saw him and Alyssa I was shipping these two like crazy. They have such an amazing chemistry, and easiness that I didn’t see with Jake and Alyssa.
As the book passes his list of awesome traits just grew and grew, and my love for him also grew. He was just such a sweet guy. Yes, there was one time I wanted to shake him, but, yes a but, I could also understand him. I could understand the pain. I could understand that he would say that.
I was rooting for him and his internship. It was definitely a fun surprise when we found out that was what he liked the most and that he was awesome at it.

Of course I won’t say anything about if Miller and Alyssa end up. Hahaha, nope, you will have to read this sweet book!

Then there is a slew of side characters. From my favourite girls: Chrissi (she was so sweet, and I loved how she was the fairy godmother to Alyssa’s Cinderella), Camilla (cold on the outside, but I could see quite a fun girl underneath that and as the story progressed.. well I just liked her more and more), Rose (so totally the polar opposite of her twin Camilla, she was so much fun), the sorority sisters. To my OMG can you just disappear already: Yael, and (duh) Harper. Yael especially was just a horrible character, I can’t see why Miller is so close with her.

The park is described in such a way I could just imagine myself there. Either as a guest or as one of the characters. Then there are tons of events that happen and I was there. I was there when all the events unfolded.

Phew, I think I could go on and on about this book. Gushing about it for a long time, but I think I will tie off my review here. I would just like to say that I highly recommend this book to everyone! It is a fabulous book with some light-hearted stuff and some heavier stuff mixed to a perfect pink glittery mix.