Well, this was terrible. 😐 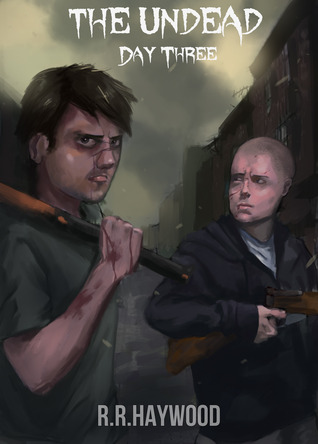 Day 1 and Day 2 were pretty great. I had some issues with the choppy/weird writing (and still have issues, some sentences just didn’t make sense in any way), and maybe some other smaller things, but let me just tell you that Day 3 was terrible. Not only did it bring a full-time Dave (urgh, terrible character) with it, but also carnage (really, was that needed), bowel movements (I don’t need to know how much came out of his ass, nor do I need to know the smell, thank you), and then there were even more scenes that just made me cringe or roll my eyes.

Oh, and I laughed so hard when those kids came out near the end, and the reaction of our MC was: “Where are their parents? Why are they out in this, they should be behind that barricade. Someone has built it and I can only guess there is a safe place behind it.” Really guy? Do you think these kids even have parents? When all of the world is dead? They are probably survivors and banded together. And no space is safe in the world of the undead.

And what happened at that barricade, or more the journey to find that vehicle, was weird and at times the story jumped and hopped. One moment x would happen, then a, then x, then back to y. Sometimes we would just get some magic event happen and then back to normal business. It was all confusing, and I had to read back a few times to make sure I don’t have any missing pages in my copy.

Dave was a terrible character. He never speaks, he was boring, he was annoying, and I wish we had a character who was a bit more of a match to our MC than Dave. It was just all awkward and strained.
His continuous Mr. Howie also got annoying. Really, can’t you just call him Howie? I know he used to be your boss, but come on, this is the end of the world, you can let go of such niceties.
Plus what happened at that barricade? What the actual fuck? Suddenly he went from silent and aggravating to some kind of serial killer on the loose after years of solitude in prison. It was highly unnerving.
But even if I thought this, I didn’t like how the MC kept berating Dave in his head. Yes, Dave is weird, awkward, eh, boring, and more, but he did teach you some things.

The massacre at the beginning? Um, whut? I know you hate those zombies, don’t we all, but seriously, was that truly needed? You could have been killed yourself, and then what would your sister or your parents do (if they are still alive).

Plus, it just felt so endless. Like the day would never end. yawns

Sorry, pretty good start with Day 1 and Day 2, but what the hell happened with Day 3? It was just over the top, weird, awkward, disturbing, and unnerving. I am not going to continue reading this series.