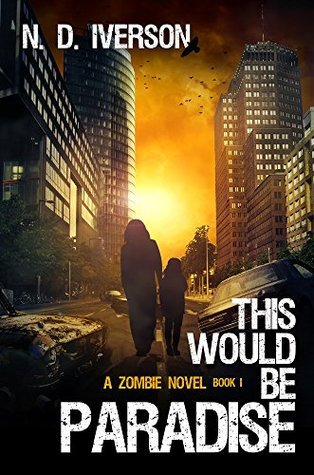 So, I am definitely in a zombie book mood, and I decided to start reading this one. It has been gathering dust on my kindle for some months now. 😛

The book starts off calm, but that is just a facade, a zombie apocalypse is starting, and Bailey quickly finds herself running for her life. I loved that this. Not the running for dear life, but that the story doesn’t waste time getting to the action, to the confusion, to the end of everything. I have read enough zombie books that just started with everything before the zombies. Of course in those books it is quite clear that something is not right, there are news reports flying about, people are sick, and much more, but it doesn’t happen often that we just dive headfirst in an apocalypse. I do wonder much our girls had to drink that they didn’t notice anything was wrong until they went outside.

And from that point on we see the standard confusion, someone is bitten, is he or she OK? I can tell you now, if I ever hear about a strange strain of flu, and I see someone who has been bitten, I won’t be making friends with them, if anything I will just walk around them. Far far around them. Really, it is such a cliche that in almost every zombie book these people just walk up to someone who is clearly not right, and then getting their faces bitten off afterwards. 😛 You can just imagine me shouting at the book each and every time it happens.
I did like the fact that Bailey was scratched. Not that I am into that thing, or that I feel like she deserved it, but it added something. Plus it brought a returning theme throughout the book. She has to keep it hidden, not everyone may be so kind about it, plus there is the added stress if she is immune or if she will still turn in the end. I am still curious about the immune part. Quite often in books about zombies scratches will turn you.

Bailey was a terrific character. She was quite authentic, and I could really relate with her and her actions. I think I would also be a Bailey in an apocalypse. Not knowing how to handle a gun (sorry guys, but where I live guns aren’t allowed for everyone and you can’t just find them at your local grocery store), even after practising she still had her problems (which is logical), but also feeling the guilt of having to murder/kill another human being, even if that person is a zombie. And later even the feeling of having to defend herself at something worse than zombies, and those that read zombie books know what I mean. Plus add to that the worry that you might be a liability to the group.
But Bailey is not giving up. She is fighting hard to earn her place, she is fighting hard to survive, she is doing everything she can to become better. To figure out how to get supplies, how to fight zombies. In the later parts she even takes care of Chloe, and while yes, she made mistakes, she still did all she could, and I just wanted to hug her and tell her that she is doing a great job. That she did nothing wrong, especially not when that happened.

Of course we also have other characters. From best to worst: Ethan, Zoe, John, Taylor, Darren, Chloe.
Ethan was such a sweetheart, and I was definitely shipping these two together. Yes, not all that appropriate considering the situation at hand, but they fitted together perfectly.

Zoe was a sweet girl, though we don’t see a lot of her, especially not when the group gets together. I did think this was a shame, I wouldn’t have minded seeing more Zoe. She isn’t really that strong (we never really see her fight, and she generally stays inside), but she was interesting and she certainly had snark.

John, and also Taylor. It took some time to get me to like them. They really didn’t make a good first impression.

Darren, I am still not sure what to think of the guy. At times he did do some awesome things, and he showed he knew how to handle the situation, but at other times I was just waiting for him to do something bad.

Chloe. Parts good, but mostly bad. I was at first quite delighted that this tiny girl knew how to handle her guns, and the fact she had snark. But then as the story progressed I only saw a girl who is a liability. Yes, I know this is harsh, but she did several things that would have brought down zombies on everyone. Add to that that even though she is supposedly so strong and dependent she always needs someone to kill the things in front of her. The thing that happened to her (don’t worry, nothing too major) made me just dislike her more. I get that it hurts, I get that you want to hate someone, but really, this is not what you should do. Plus all the screaming? Do you want to get all the zombies to the house?

Of course there are also enough cliches in the book that one also finds in every other zombie book.

Then there are still the questions I have. Like what happened during that time when Bailey got back at the cabin? How did the flu spread? Is there a cure coming? Where is the military? Are there more survivors next to that group of douchebags? Didn’t anyone see this coming? Will Bailey ever see her family again? How far spread is this disease/epidemic? Is it really international as was mentioned on that last message on the radio, or was that just a lie? And then there are a few other questions that I just hope will get answered in the next books.

The book is fast-paced, the zombies are creepy, there isn’t that much gore (thankfully), there is never a dull moment.

I really liked the bonus chapter that was added at the end. It tied up neatly with the first chapter, plus we see Darren there too.

There was just one other thing, next to Chloe, that I didn’t entirely like. And that thing was the fact that the book moves a few months in the future at one point, just like that from one chapter to another, and it was really jarring, and also slightly confusing. I had to re-read that page, and the previous one to make sure I was reading it right.

What more? Mm, I think I mentioned everything. Without a question I would recommend this book to everyone looking for a fast-paced zombie book.