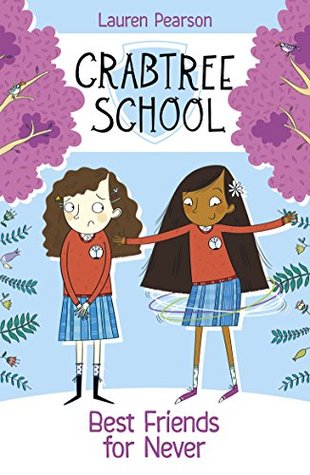 So, I was really excited for this book. The previous book was hilarious, with lots of likeable/loveable characters!

Sadly…. I just didn’t enjoy this one as much as I did with the previous book. The drama was over-the-top, Ava was eh, Zoe was (eventually, but not at first) eh, and the arguments… please…

It started off quite nice with Zoe and Ava charming their Best Friends necklaces. (I just adored that, it was so cute. Plus all the stuff they threw in (hair??).)

We have a new character added to the mix, and (I think this is due to Zoe’s POV) I just couldn’t like her that much. In the end my liking for her started growing, but I think it will be a long time before I truly like this girl.

But really, I was mostly agreeing with Zoe. Yes, Ava, I can imagine that you want to show this new girl around, that you want to make her feel at home and make her feel happy, but you also have another friend. It just felt like Ava had a new toy and that she wasn’t that interested in her older toy. Ava just dropped Zoe like a brick. I just wanted to hug Zoe and tell her that it will be fine, and that otherwise she can still make other friends. 🙁 I can imagine that Zoe may gone angry. She tried telling Ava how she felt. She tried explaining. And sure, it may have come out a bit wrong, but I would think that Ava can see that she has hurt her friend by just dropping her like that, making a friendship bracelet even though she barely knows Rani.

Of course later on I wasn’t sure who to like. My sympathy for Zoe was slowly dropping to zero (she just went too far and got way too hurtful). Ava was still bleh. Lottie was interesting, but she was also pulled into the friendship vortex. Isabelle, I really liked her, but because she didn’t get to see everything from Lottie’s book (Duh, like Lottie says: “Some things are private!”), she turned a total 180 degrees.

It just got so silly and overly dramatic and I just couldn’t like it that much. Whereas I was saying in the book’s previous review that I found the characters acting way older than they are, in this one I will be saying they acted exactly as the age they really are. 😐

But I kept reading because I wanted to see if there would still be a happy end for all of the characters. If they have a chance to say sorry. If they have another shot at friendship.

Also another reason was, of course, the illustrations by Becka Moor. 😛

I will still be buying the next two books, because I am still very interested in this series, in this school, in these characters.