I am happy (and proud) to have the Blog Tour for Secrets of Skin and Stone visiting my blog! For today’s post I got an excerpt, a giveaway, and of course the standard book+author information! 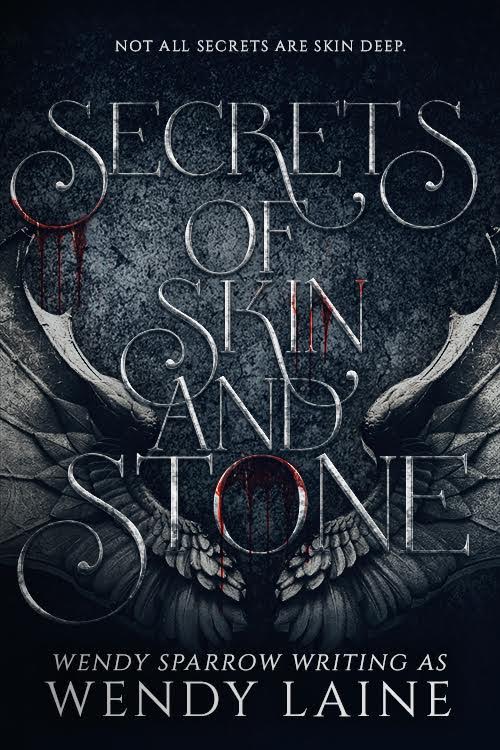 Something is wrong in Hidden Creek. The sleepy Alabama town is more haunted than any place fiend hunter Grisham Caso has ever seen. Unearthed graves, curse bags, and spilled blood all point to an evil that could destroy his gargoyle birthright. The town isn’t safe for anyone, and everyone says fiery Piper Devon knows why.

Piper wants to leave Hidden Creek behind. She’s had enough of secrets—they hide in the shadows of her room and tell her terrible things are coming. Too-charming city boy Grisham might be her only chance to save herself.

To survive, Piper and Grisham have to shed their secrets and depend only on each other. But what lurks in Hidden Creek still might take everything away from them, including each other.

Wendy Laine is the penname of author Wendy Sparrow. Writing is in Wendy’s blood as are equal parts of Mountain Dew and chocolate. Wendy has been telling tales since she was a child with varying amounts of success. Her parents clearly anticipated her forays into the paranormal because she heard “The Boy Who Cried Wolf’ over and over. She lives in Washington State with a wonderful husband and two quirky kids and is active in Autism and OCD support networks. She can usually be found on Twitter where she’ll talk to anyone who talks to her and occasionally just to herself.

Excerpt time! I had several to pick from, but I loved this one the most as I know the feeling of being on a motorcycle, the feel of the wind blowing when you go faster.

With Piper pressed up against my back, every rise and shallow of her body brushed mine as the bike bumped along the dirt roads around Hidden Creek. She had her fist bunched up in the fabric of my shirt. Was she scared? Her sudden burst of laughter ratchetted up my body’s temperature and then she yelled, “Go faster, Gris!”

I went faster. Her excitement was nearly tangible. Her fidgety shifting was for a whole different reason. A good reason.

The sunlit fields full of newly blooming wildflowers seemed to match Piper’s new mood. She was carefree—something I hadn’t seen in her yet, and I liked it. That I’d thought of this and dragged my bike over made me like it even more. It was feeling more like a date and less like an attempt to interrogate her.

Piper laughed again, tightening her legs on either side of me.

Even though it was still cool and not even noon, I started to sweat under my helmet. The humidity and heat of summer would be unbearable, but I planned to be long gone before this spring season had passed. I shouldn’t get too attached to the girl with me.

I was up to about 95 percent certain she wasn’t roping in the fiends—purposefully. The curse pouches I’d removed from her room last night had different ingredients than the one I’d found at the mill—nothing uncommon or unusual. But they still drew in fiends. I’d killed three outside her room and shoved two more out her window.

Piper somehow managed to scoot even closer. Her legs were right up against my thighs, and I could see her knees out of the bottom of my helmet.

This Blog Tour was organized by:
YaReads Blog Tours