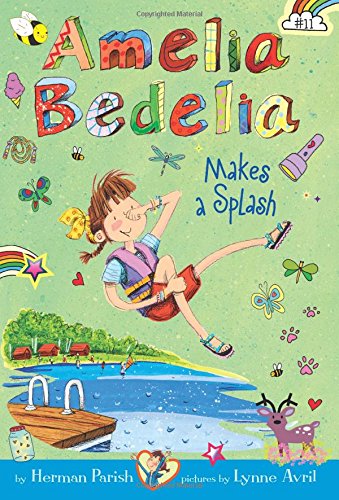 It is the summer season, so I thought it would be a nice time to read this book.

I have read only one Amelia Bedelia book so far, but when I spotted this one I had to try it out. Camp here we come!

Before I go to the good stuff, I have to get one thing I found weird. Something that I have seen in many other books (YA or children’s) taking place in the US. People sending their kids to camps for weeks, even months. It greatly confuses me why anyone would just ship off their kid to camp for the entire summer. Don’t you want to do fun things with your kid during summer? Can’t your kid just be at home for a bit and relax or go out with a friend? Maybe it is normal to just do this in the US, but in my country, camps don’t take months.

Now back to the story, which was a delight. I can imagine that Amelia was quite shocked, and I was wondering why her parents hadn’t let her known earlier. Her reaction was one I would also have, but, just as Amelia, I would probably forget all about it quickly and enjoy the camp. Which is what happened to Amelia. I was quite happy that she was so happy at the camp, having a great old time with new friends. Doing all sorts of fun activities ranging from swimming (in freezing water) to survival skills. And unlike many other books about camping, it seems the food is actually good at this camp.

The camp sounds absolutely delightful, while I wouldn’t want to be there for 8 weeks (sorry but that is just way too long), I wouldn’t mind being there for a week or maybe 2 weeks.
I loved the descriptions of the camp and I could just envision it (plus the illustrations helped giving me an even clearer image).

The side characters were also fun, I loved how quickly they turned to be friends.
Also the fact their names all started with an A was nice. It brought them even closer together.

The illustrations were absolutely brilliant, adorable, and cute. I so love the style and the fact they brighten up the entire book. There are just illustrations everywhere, ranging from big to small and tiny.

The ending was really sweet, though, given the illustration, I wonder how no one noticed that sticking out of the earth. I mean really, that is just gigantic and the rows of targets are quite close by it. But I am really happy for the camp, I hope that means x won’t happen.

I found highly annoying was the fact Amelia took everything literally. For instance someone said to step on it when delivering a pie, and she did just that, or when someone wanted a splash of juice she just splashed juice all over the woman. How old is this kid? 3? It is funny once, but Amelia KEPT on doing it the ENTIRE book. Plus I found it very offensive that she apparently didn’t have a clue about what “late husband” meant and instead of steamrolled on about it, even going so far as to not get the other clues. 😐 Girl, please….

Plus I am sure that, since she is in school, she knows about the whole last name being used as a standard. But instead she was being confused when someone called her by her last/first name and the following explanation.

Another pet peeve, which I also had in the previous book, was the fact that she kept being called Amelia Bedelia ALL THE TIME. I get it. That is her name. But can we please just call her by her first name? I don’t see anyone else getting called by their first and last name together, unless done in an introductory way.

But all in all, I still had a fun time reading this book.