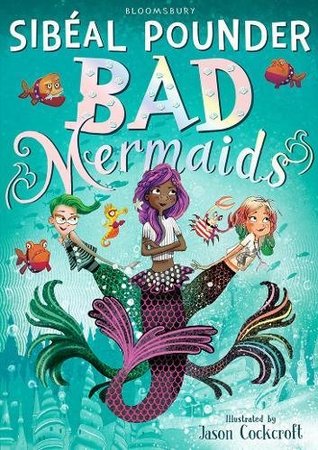 I started this one on Friday, then decided to save it for Saturday when I had to travel a bit. It was just too much fun, and I could see me fly through the book in an heartbeat.

This was AMAZING. It was hilarious (I almost rolled off my seat on the tram a few times on Saturday while reading). After a while I gave up on putting pieces of paper on favourite quotes because I had too many. 😛 I can’t wait for the next Bad Mermaids book!

I adored Witch Wars (the previous series by this author), so I was hoping that Bad Mermaids would also be fantastic. And it was! It felt like Witch Wars, but now with Mermaids (Good and Bad).

We have 3 characters. Beattie (middle girl on the cover who is pretty awesome and does some pretty epic things), Zelda (the one with the awesome hair on the left, no Zelda, stop touching buttons you shouldn’t touch), Mimi (the cutest of them all on the right (and a bit of a ditz)). I loved them all from the start. At times I confused the twins a bit and had to read back. 😛 Still not sure how I did that as they all had pretty different voices.

The mystery is a delight, the queen has been fishnapped, the palace is empty, and there is a new ruler in town, and a whole army of piranhas who just love a mermaid snack.

Our group of 3 mermaids are off to figure out what has happened. They are the only ones who can move freely (which I quite loved and which made sense since they weren’t around when x happened), and thus they are the destined ones to help out. I loved how they traced back what the queen’s daily schedule was, and also to meet with the SHOALs.

I have to say I quite quickly knew who was the culprit though. It was just too glaringly obvious going by that article. I was amazed that none of the girls had an idea.

Plus it was fun to read about the various towns and what set them apart from each other. How there were prejudices for each town.

I had a laugh at the fact there is a giant shark swimming around with a restaurant in him/her!!!

Just like Witch Wars I hated the mascot character (as I would call them that), this time it is a talking seahorse named Steve. My Gosh, he was just so annoying and I was constantly wondering if sea horse would make a good dish. Or if duct tape would work under water. He kept thinking he was so awesome and so fantastic, but sorry Steve, you are nothing but a nuisance. Go away, back to where you came from.

The ending to the book was fabulous, though I loved the last pages even more as it really set the stage for the next book! Which I need now in my life!

Like with the Witch Wars series, this book also has news articles, stuff about certain mermaids, advertisements and much much more.

Oh oh, and them crashing into that stall reminded me of that one scene from Witch Wars!! Plus this world also seems to have pipes connecting stuff.

The book is also filled with illustrations, and I just adore the style (cute). It fits perfectly, and everything is pretty much as I would imagine it would look.

I would highly recommend this fun book to everyone!