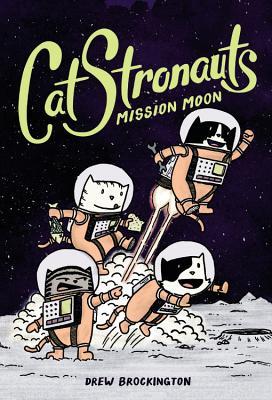 This was a wild guess when I bought it on Amazon, I couldn’t find any excerpts, so I just had to go by the cover and the blurb, both of those sounded awesome, but I know that such a thing doesn’t always mean the book is good. So I was just crossing my fingers.

And then the book arrived a few days later, I opened it up, and knew I had a winner. I just couldn’t stop reading, instead I was laughing my butt off during so many scenes, enjoying the great artwork. Yeah, this girl was happy she took a gamble, now I just want to have the rest of this series. 😛

The world as we know it isn’t inhabited by humans, oh no, it is filled with cats! And the cats have a bit of a problem… well OK, major problem. In 60 days their power-supply is dead. No more electricity. Have fun with candles/fire.

So the president calls the best scientist there is and he calls the Catstronauts! They will have to go to the moon, they will have to save the world! Will they be up to it? I definitely had so much fun reading about their training, see the time tick tock its way to zero. (Excitement, will they make it?)

Each of the cats has its own personality, and my favourite would be Waffles. I loved (and laughed) his appetite and how he found ways to bring food with him.
Blanket was a pretty OK guy, but I didn’t like how he disobeyed orders. Yes, it saved them, but I still wasn’t approving that he apparently didn’t care about rules.
Major Meowser? Mm, on the one hand I liked the guy, but I found him a tad too grumpy at times. But he was a good leader, and he knew what to do and when to do it.
Lastly we have Pom Pom, well I can’t say much about him. He didn’t have much of a presence (at least for me).

The book switches between our crew and cats in charge/cats on earth. I love the cameo of Neil Armstrong (or Catstrong :P). The crew was working its butt off, and the cats of earth were just hoping that everything would go all right.

The cats are truly still cats, not what you see in other books, that they are too humanfied. Here they have traits of humans, but they will still do a lot of cat stuff, like when the power is out they just take a catnap on the streets, basking in the sun. 😛

I won’t spoil the ending, you will have to read for yourself to see what is going to happen. But I can say this, I loved the ending.

I guess next month I will be buying the other book, and also pre-order the 3rd book which is coming out in October.

I would recommend this book. Cats, cats, space, and more cats.