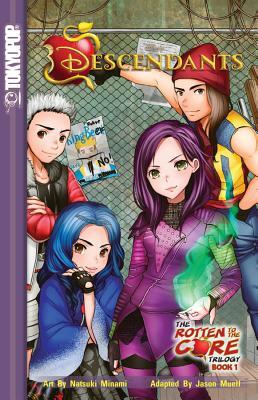 I saw this comic (Sorry, I wouldn’t call it manga, it does use a style that somewhere resembles manga-style, but that is it.) on Netgalley and was curious. I had tried the book version of this series when it came out, and sadly didn’t like it (still sad about it, as the idea and blurb sounded awesome and perfect for me). So I was curious if the comic would be better. Sometimes comics lend themselves better for this kind of thing than a normal book does.

Sadly, just like the book, I didn’t particularly like it. I am giving it 2 stars because I like the colourful art, the idea is good, I like Evie (and sometimes Mal). But there is just too much that either didn’t make sense (why suddenly allow children of villains after so many years of not allowing villains to come out of their prison) or the time just went weirdly (so they just arrive at this school and immediately go for the wand instead of just making a plan and thinking a bit further).

Plus add to that the fact I didn’t like the male characters at all. Jay was just bleh, he was boring + he seemed like he couldn’t do anything at all. Then we have Carlos who is apparently obsessed with lamps and genies (I guess it runs in the family, though how I don’t want to know) and he is the biggest idiot ever. Oh hey, there is the wand, let me just jump right at it. sighs and rolls her eyes

The worldbuilding is also confusing. For some reason all the villains (and good guys) are together no matter their original story or time. How did that happen? I mean I can imagine Mal’s mom and Evie’s Mom being together, but also Jafar? And Cruella? And who knows who else?

Also it is just a tad bit boring that apparently no one is trying to break the mold. Unless that will still happen. But our villain kids are evil. The good kids are good. Really? Can’t we have at least one who just wants to be evil, or just wants to be good?

As I said, I like the art. It is a fun style and the character look pretty much how I would expect them to look. 😛 I just want to know what happened to Jafar, he looks sooooo different.

But yeah, I won’t be continuing this series. It just isn’t for me. I have at least tried, twice at that.