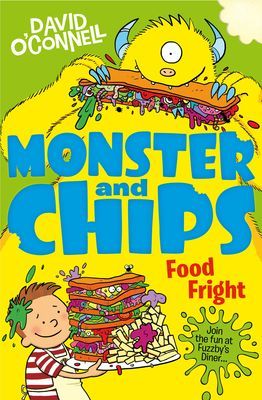 I read this book in Dutch, but I will write a review in English. So I will be using the names as they are in Dutch.

Finally, finally!! I found this book at one of my libraries! I was just delighted and I may have squeed a bit loudly in public (which, eh, now that I think of it… isn’t that weird as it happens more often than one may think). 😛

We are back with 4 new stories! Of course, just like the previous books, they are separate stories taking place at different times, but you still need to read them in order as characters are introduced in x story that come back in story y. Or events will be mentioned in story x, and be fully featured in story y. I am still really delighted that the author went with this format, it is oh so much fun.

The first story introduces Fuzzby’s neef, Zuffby (yes, really that is his name). I do wonder what the other names of the family members are. 😛 It was fun to finally meet someone from Fuzzby’s family, and to also find out that everyone in the family is cooking. The competition between the two was a delight (though the food wasn’t such a delight shivers at the thought of anyone eating it). I had a laugh at the zombie cupcake and that he really has a single-track mind, brains!

The next story we find out more about how magical the store actually is, and while sliding down the drain to some unknown place isn’t really in my bucket-list, it does sound like fun. I loved the mystery and also finding out who the mystery person was.

Then comes my least favourite story, in which we first get introduced to de Monsterkermis. That part I really liked, but I hated Barry. Barry is terrible. I already didn’t like him that much from the previous stories, but in this one he went a bit too far for my liking. 😐
Sure it was still hilarious to see the food come to life, and just by adding that small ingredient + add to that the fact it was contagious.

Next comes the story about de Monsterkermis, I was really looking forward to that, and it was still really good, though I wasn’t so sure about that villain popping up again and doing that. He really can’t just leave it alone, can he?
But aside of that I loved the descriptions and I could just see myself at the place.

I am still loving the illustrations.

Plus this time the book’s Dutch title is from the third story.

I hope there will be more books about Joep and Fuzzby Joekelmans, about their adventures, about food (though again, I won’t be eating anything of it), about other monsters. I will be waiting!