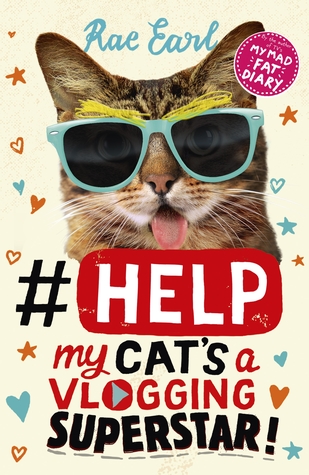 This was kind of a blind buy. 😛 I just spotted this one on Twitter and had to have it, so I immediately dashed to Amazon, and well here we are. 😛

This was a delightful, funny, real book about a funny, smart girl, her vlog, her cat, her friends, about boys, weird family, and much more.

Our MC Millie is a wonderful girl, hilarious as well. At times I could relate with her. Her anxiety levels are through the roof at times, and I can understand the feeling of things just spiralling down. Not knowing how to stop thinking those thoughts, not knowing how to stop worrying about things. The mind is a weird thing and at times you just want to shut it off.
I also loved that Millie was quite smart, she knew a ton of things from just normal school stuff to plants. It gave her a bit of maturity.

This book has a whole lot. From a best friend whose parents fight constantly (why don’t they divorce already?), a mom who just can’t understand her daughter at times (but then at other times is really kick-ass), a dad who tries his best but well… still lives with his own dad, an aunt who is totally cray cray (but in a good way), Erin the bitchy popular girl, the internet and its comments, 2 boys that are interested in her, feminism, a cat named Dave (and it is a girl), vlogging, how to handle a body that just decides it is cool to flop over. Her life is a roller coaster and we aren’t getting off until the end of the book.

The vlogging was really fun, and I just adored her vlog. Not make-up, not clothes, no instead this girl went for a blog about advice. She wants to help people with problems, and I really love the way she brought the advices. In a fun way, but with enough seriousness too.

The love triangle with Danny and Bradley? Eh, I never really cared for Danny, he was just a bit too flashy for me + I was annoyed with him instantly going for Erin instead of having a look around for someone different + add to that he suddenly wanted to be with Milly while still with Erin… eh, bleh.
Bradley however… I just loved that guy from the start. He was sweet, cute. Plus I loved that he loved lifts, cosplay, and other nerdy things. I was shipping him with Millie from the moment we saw him, and I could just see the sparks flying. Sadly, Millie is a tad blind in regards to her feelings, and I just wanted to shake her at times. Yes, girl, you can have friendship with boys (I had quite a few of them), but this clearly isn’t a friendship. You don’t see him as a friend friend, and he doesn’t see you as a friend friend. 😛
I am just disappointed with how the love triangle was eventually solved. I didn’t expect this ending. 🙁 sighs

-0.5 star for the unnecessary drama nearing the end. Lauren went from best friend to OMG Jealousy and stupidity. Yes, her life isn’t fun with her parents, but really, you could have just told your best friend instead of saying nothing about it getting worse… And yes, maybe Millie is a bit centred on her own things these days, but is that truly that bad? She is exploring something new, there is also a lot happening in her life at the moment that is new and fairly scary (also bullying). Also in the end she still cares about you, and she is still calling/messaging/talking to you almost all the time. She still knows you exist, so pulease girl get your drama queen mode off. 😐

+lots of love to the title and cover of the book!

But I loved this book! I loved the characters (well except Erin and Danny). The vlogging was so much fun (I still want to vlog one day, but I am still too shy/private + worried about trolls to do it). It had cats! It had friendship! I laughed so many times while reading this.