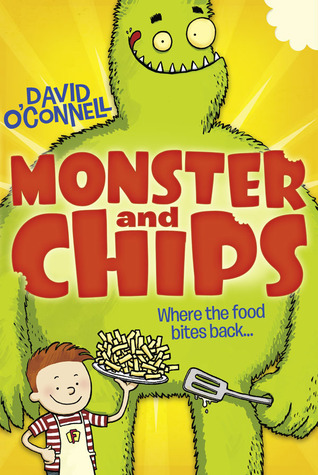 I read this book in Dutch, but I will write a review in English. So I will be using the names as they are in Dutch.

So yes, I was saying I had this one reserved/on-hold at one of my libraries (Library #2), but when I had time and was near Library #1 I decided to take this one with me (I would have also taken book 3, but sadly I can only have 2 books at Library #1).

This time I knew that the chapters equal stories and thus I was prepared, unlike with the book I read before this one (book #2 in this series).

In this one Joep meets Fuzzby Joekelmans. We see how he managed to find that door, and why he was even in that alley (Vicky). It was fun to see how Fuzzby immediately thought Joep was there for an interview and that Joep thought it was OK. The interview questions had me laughing though, and it was even more fun when Joep had one question right (sometimes you just have got to think disgusting to get things right).

His first day at work was pretty hilarious, especially him trying to make some sense in the food department but failing hard because he never heard of all of the ingredients (and also didn’t even want to touch them). But he did his best, and I was pretty amazed at how hard he worked and how eager and happy he was.

Plus we see the customers reactions to Joep. Something that also happens in the second book when there are new monsters, but by then at least the regular guys are used to this strange human being in their midst.

I liked that we saw a bit more of the snack bar (including some photographs of other customers).

Ah, so we see the scene that was referenced in the second book. The scene with the spider. It was quite surprising that the monsters were that afraid of this tiny thing (though I don’t blame them, urgh spiders).

And we meet with Twijgje (who was a surprise guest for me in the previous book). It was quite fun to see her introduced, and to see that she has gotten a bit nicer (and less pushy) in the second book.

The day menus are still disgusting, and with my still not happy stomach, I tended to just not read them, or just glance over them.

My favourite story? The one with the zombie cupcakes. Zombie powder, not so good to use on cupcakes it seems. 😛

Of course the book is filled with comics, illustrations, and the small illustrations featuring family Slurp giving their opinions on parts of the story.

All in all, highly recommended, and I hope that the 3rd book (which I still have on-hold/reserved) will get in soon. Maybe after that I will buy them all in English (since they are just sooooo good and funny).