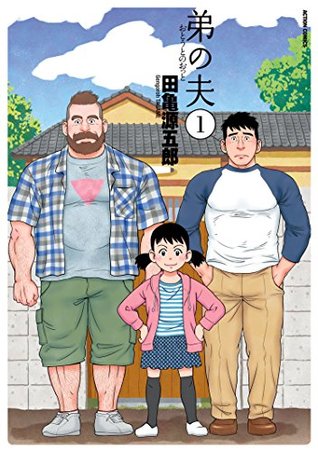 I spotted this manga somewhere and I was intrigued. A realistic manga about LGBT + Japan? Count me in.

So I started this one yesterday, wasn’t sure if I would want to continue (the reason for that will be mentioned in my review), but then decided to just finish at least the first volume.

The reason why I didn’t want to continue yesterday, and also the reason why I am rating this manga -1 star and won’t be reading it further… is Kana. My gosh, that girl is one annoying little brat. No manners, politeness? What is that?, she doesn’t listen, she is rude. Like she threw a tantrum when Mike had somewhere else to be. She apparently wanted to show him off, like he is some kind of toy you can just brag about. No. Just no. She is offended when her dad flips because she is touching Mike’s chest hair (frankly, if I saw my kid touch some stranger’s (as Mike is pretty much a stranger) chest/boob, I would also flip out). And throughout the manga I just wanted to kick her out of the story.
I could go on about Kana, but I don’t want to waste more time on this little poop.

So let’s go to the good stuff.

Mike is a terrific character and I love how open and kind he is. He is like a big friendly giant. I love that he was a Japan fanatic (it fitted him so well) and how much he wanted to learn about his late husband and his past. He wanted to meet with family. It was quite heartbreaking at times though, because you could see how hard it was for him to meet his husband’s twin brother + see where he lived. At times I wanted to hug him because it seemed like he could use a hug.

Then there is Yaichi. At first he is pretty stuck in his ways, but as the story continues you see him open up, think back on situations, try his best to be accepting, try to be friends with Mike (even though it is hard at times). Some people may call Yaichi homophobic, but I just think that is mostly to blame with how Japan does things. It is a slow process for him to get more accepting, but then again it wouldn’t be realistic if he was accepting within a short time. I was really happy that he was willing to open up, and to see him really think about things (though it was at times hilarious, like the time he thought about the sex part). But it was also heartbreaking as he thought back to how his brother came out of the closet, and how he reacted to it.

I was quite surprised by the appearance of the mom, I thought she was dead given how Yaichi talked to the photograph + some other reasons. It was a nice surprised, I was happy for Kana.

I am kind of curious as to if all the men in the series are buff. Both Yaichi and Mike are quite muscled, yet I never see them do any fitness/exercises. 😛

The art is pretty decent, not really perfect (especially not with how Kana is drawn), but still OK enough.

All in all, a pretty good manga, just a shame of poopy Kana. I would have loved to continue reading this one.