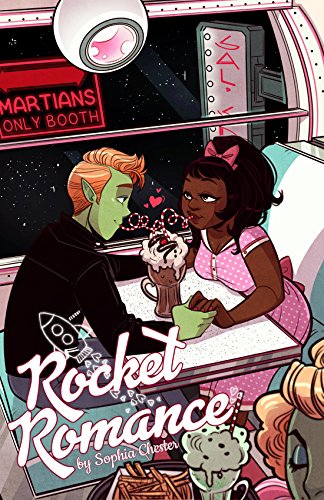 I spotted this super adorable cover over on Twitter and just had to check out the book.

And I am so glad I did. It is a short one, and it consists out of 2 stories, 2 different couples, there are 2 similarities between the stories.

One it all takes place on the Moon! Yes, you heard me right, these stories take place in space. These characters live in colonies on the Moon! We definitely need more cute stories like this taking place in space. I do wish we had seen a bit more about how they lived on the planet, at times it felt just like they were on Earth. 😛 But I guess given the shortness of the stories that was just not doable.

Second the stories feature discrimination. The Martians in this story are treated like they are poop. They are shunned, there are protests when they want to join schools or places, they get the most basic of houses/etc, and much much more. The author wove this in the story in a way that I quite loved. Especially the first story features this discrimination a lot when our MC falls in love with the exchange student who is a Martian. She witnesses at first hand how hard it is for the Martians.

So, I will write a short bit about each of the stories with a rating next to it.

Roxy x Mike (or Michael, though he prefers Mike): 4.5 stars. -0.5 star for the instalove. I am just not a big fan of that kind of stuff, and it was just a bit too magical how they fell in love instantly. Their relationship, or seeing it building up, was cute, but again, it could have done without the POOF love part. Of course I can imagine why, the story would have gotten too long if you wanted to build up that love.
Back to the other parts. Roxy was the best character, and I loved her dearly. I also loved that the author wasn’t shying away from the fact that Roxy was a bit chubby, or that she loved food (and she did that a lot, it was so fun to see her realise it herself). I loved that Roxy didn’t care about losing weight in the short span that we see her being love-love with Mike. She even just orders a big pile of fries. That is my girl! The many times I see girls pick little portions when they are going out with a guy. sighs
Mike was a fantastic guy, and I was so sad that he had to go through all this crappy stuff. And that underneath his fear there was just great, sweet, wonderful guy who made jokes, wasn’t afraid to compliment a girl in a sweet way, and who had a great laugh (going by the descriptions and my imagination).
The story was really sweet, and I actually felt sorry it was over so fast. I wouldn’t have minded even more chapters with these 2 characters. swoons

Kat x Leo: 3 stars. A pretty decent story, though I felt Leo was a bit too mature (and perfect) and Kat was a bit too much of a rebel for me. Plus I didn’t always see the chemistry between those two. At times I did though and I was shipping them like mad, but then there would be other times when I would be hoping they wouldn’t get together.
Even though Kat was a bit over the top, I did love that despite everything going on in her life she was taking care of those girls. She took them in, and tried to feed them, love them, and protect them. She was really great at that. Plus I loved that, even though all the bad things people said about Martians, she was open to them and even allowed one to take refugee at her house. That was a really sweet thing of her to do. So many people would hurt, or reject that girl, but Kat opened her house and arms to her.
We have a nemesis, named Paige. Gosh, I disliked that girl SOOOOOO much. She fitted perfectly in the role of a nemesis. She was vile. I disliked all she did to Kat. And sure, Kat also instigated some things, but did Paige have to take it that far?
I did like that the author added backstory for Kat, we see how she got to be where she is now, and I was just so sad that everyone gave up on her (her school, her family), and that while she wasn’t feeling well at times, she just kept on going, she kept working hard, trying to figure out her life. She found some great friends, though I would rather call them her sisters, they are that close.
The ending to this one? It was cute, adorable, and a bit predictable, but I didn’t mind. I was happy with how it all tied up together.

All in all, I would recommend this book, it is cute, fluffy, but also deals with real problems. Plus it takes place in space! How can you resist that? 😛