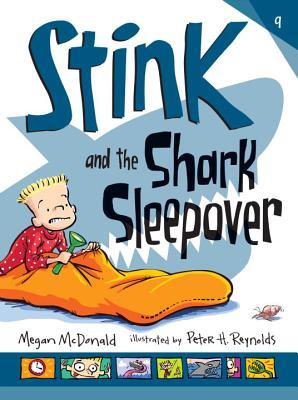 A sleepover at an aquarium, a fun night, and sharks!

This is my first Stink book, I have read all the Judy Moody books, and also most (if not all) of the Judy + Stink books. So I thought it was time to check out the Stink series as well, even though he isn’t always my favourite character.

In this book Stink gets the chance to have a sleepover at the aquarium along with his family, friends, and also other people who won a chance for the sleepover. Of course it is not just a sleepover, there are all sorts of events happening + you can wander around while the aquarium is officially closed!

Boy, I wish I could have a sleepover at an aquarium, it sounds absolutely fabulous! Sleeping with fish/underwater creatures around you? That is a dream right there!

Stink was pretty OK in this one, though at times I found him a bit whiny, and at other times I found him acting a bit too OMG look how smart I am. But luckily there were enough times that he really showed his good side. Plus his enthusiasm for sharks was really sweet, I loved how he went into fanboy mode quite a few times.

Of course we also see Judy, and I was happy she also appeared. She also seems much more mature in these, perhaps because we see her from Stink’s POV. When her brother needed her she stepped up and helped out.

I am not sure what to think of Riley. She was pretty annoying, bleh, and I just wanted to throw her in the shark tank. I am not sure why they were so tolerant of her, she kept being rude and kept butting into things. If I was Stink I would just have asked if she would leave me alone.

There is also a part about facing your fears, and I liked that it was added.

The book also contains some fun facts about sharks.

All in all, I think I will keep on reading these Stink books. This book was so fun!