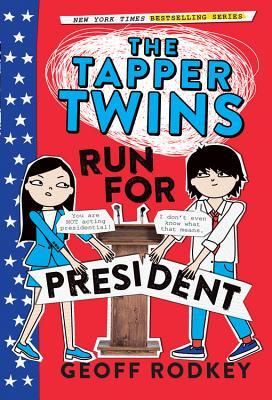 One of my libraries finally had this book! I have been looking forward for it for so long. I am hoping that they will have the next book a bit faster though.

In the end I did like the book, but it did think it was a bit less than the previous ones. The characters were pretty annoying, Reese and his OMG my parents only care about Claudia-card got annoying, the election just seemed overdramatic (or maybe it is because we don’t have that kind of thing where I live). I will also stick that some people shouldn’t get kids (the parents in this series do a terrible job at parenting).

It was still interesting to see who would win though, would it be Claudia or would it be Reese? It was a pretty close battle between the siblings. Their battle strategies were a bit weird, and I just laughed at how little Reese had in his brains. It seems Reese only has soccer and games in his brains and that is it. Don’t ask him anything else.

Kalisha was a pretty terrible person, the things she did all for those extra points? Bah. You don’t do those things.

I am happy to see that Jens and Claudia are now dating (I don’t care that she is denying it, they are dating, they are boyfriend and girlfriend). I was shipping those two since the start. I hope that Claudia will see him as a boyfriend, he deserves that at least. Though I do hope we will see them do more dating stuff, as I didn’t really get the dating vibe from them.

I just loved Jens’s commentary, plus it is all true.

How the books are formatted is still my favourite thing about this series. Normally I am not into those kind of books (written like some sort of play), but it works just so well with this one. I just can’t stop reading.
Plus it is oh so much fun to have texts, pictures, little notes, additions added, it makes the story come to life.

All in all, I still quite liked the book, I flew through it, but I hope the next book will be better again.