Today something different from normal! Instead of a book that isn’t out yet, I am picking a book I just ordered. A book I really want to read, though I will have to wait until my vacation in August before I can read it (arrrghhhh).

I spotted this book in Dutch at the book store and was immediately interested. It looked like a book I would really enjoy. Then I found out it was originally an English book, and thus I put the Dutch version back, and went online to order the English book.

It is a book with sci-fi, with bunnies (evil ones at that), a book about school, about evil scientists, what more could one want? I can’t wait to meet Kelvin (I am guessing his name is a reference to the temperature unit) Klosmo (haha, another pun), and to see why he lied about being a genius, and did I already mention bunnies? Also from what I saw while flipping through the Dutch version I saw the book was full with illustrations! 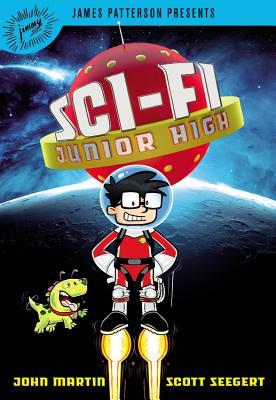 Kelvin Klosmo isn’t just the new kid at school – he’s the new kid in the galaxy! Welcome to Sci-Fi Junior High: an inter-galactic space station with students of all shapes, sizes, smells, and… slime content. As the son of Earth’s two most famous geniuses, Kelvin isn’t just the smartest kid in the world….he’s the smartest kid in the UNIVERSE. At least, that’s what everybody at Sci-Fi Junior High thinks.

So, maybe Kelvin lied a little about being a genius to fit in. And maybe a mad scientist is about to take over the universe unless Kelvin can stop him. Maybe everyone is doomed.

Well, at least Kelvin won’t have to worry about math homework anymore.

Sci-Fi Junior High is an out-of-this-world story about friendship, accepting our differences, and the fight against evil… bunnies. Yes, evil bunnies – don’t ask.