What better way to start a Monday then with a fun Blog Tour?

Today the Blog Tour for The History of Hilary Hambrushina by Marnie Lab is stopping my blog with an excerpt! But of course I also got the normal information, and I got a giveaway you all can enter (for a $50 Amazon gift card).

So let’s get this blog tour started! 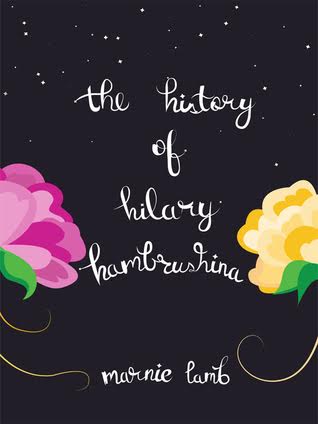 Hilary has one goal for her first year in junior high: to become popular. But her plans are turned upside down when her best friend leaves for the summer and a quirky girl named Kallie moves in next door. Kallie paints constellations on her ceiling, sleeps in a hammock, and enacts fantastical plays in front of cute boys on the beach. Yet despite Kallie’s lack of interest in being -cool, – Hilary and Kallie find themselves becoming friends. That summer friendship, however, is put to the test when school begins, reigniting Hilary’s obsession with climbing the social ladder. As Hilary discovers the dark side to popularity, she must decide who she wants to be before she loses everything.

A Journey Prize nominee, Marnie Lamb earned a master’s degree in creative writing from the University of Windsor. Her short stories have appeared in various Canadian literary journals. Her first novel, a YA book named The History of Hilary Hambrushina, is forthcoming from Iguana Books. When she is not writing fiction or running her freelance editing business, she can be found cooking recipes with eggplant or scouting out colourful fashions at the One of a Kind Show.

A few days later, Mom announced that she was going shopping and asked if I wanted to come.

This was rare. Mom usually only took me shopping when I needed new clothes. We went once in the fall and once in the spring, and both of us thought that two shopping trips together every year was plenty. But I loved shopping, and since Lynn wasn’t around, there was no one else to go with. So I agreed to go. Big mistake.

First, Mom spent over half an hour in a kitchen store, trying to decide what kind of salad tongs to buy. Then she dragged me to two more stores to look at sets so similar they were probably clones of the first. She kept trying to get me interested in the stuff she was buying, even though she could see I didn’t care. Finally she said she would buy me some new clothes for junior high. I perked up and asked if we could go to The Limit.

She gave me a sideways glance and said, “If you like.”

But you can guess what happened when we got to The Limit. The usual. I showed my mom a blouse that I thought was stylish, cheap, and — and this was the most important thing for my mother — modest. She made a harrumphing noise and turned away. We lasted less than ten minutes there. But this time, instead of waiting until we got to the car to start fighting, we began as soon as we left the store.

“Why won’t you let me buy clothes from there?”

Mom sighed. “Hilary, I’ve told you before. Those clothes are too revealing. They’re too old for you.”

I wiggled uncomfortably. Could my mom be right? Was it wrong for me to want those clothes? Suddenly I felt like one of those women who bought the leather skirts.

“Mom, didn’t you notice? They have a section for junior girls. You know what that means? Eight-year-olds can shop there. So how can you say the clothes are too old for me when they make the same clothes for people younger than me?” I thought this was quite brilliant, and I didn’t see how my mom could argue with it.

But she didn’t even bother. She just sighed again and said, “Oh, Hilary. You’re so naive.”

“I am not!” I said angrily. “And what does naive mean anyway?” When she didn’t answer, I said, “Lynn’s sister works there!”

Mom looked at me, hand on hip. “What difference does that make? Do you honestly think I’d buy you those clothes just because Lynn’s sister works there?”

“Lynn’s mom buys her clothes from there!”

(Yes, you read that right. Maxford’s. As in the department store where shoppers push grocery carts and prom dresses are sold next to chain saws and blood pressure monitors.)

“Mom, no! Not Maxford’s!” I squealed, as if she was holding a frothy-mouthed monster on a leash, about to let go so it could attack me.

By this time, several people had turned to look at us. As humiliating as it was to go to Maxford’s, it was better than throwing a tantrum. I gave the people who were staring at us a dirty look, and hurried after my mom.