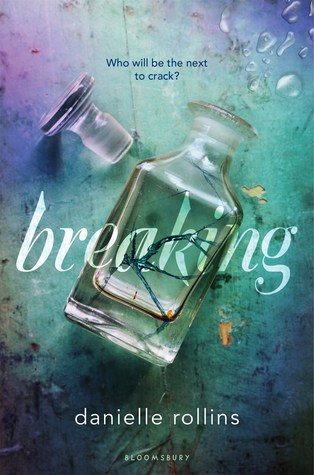 DNF at 17%. I received this book from Netgalley in exchange of an honest review.

I am really sad about this. I loved her first book in this series, and when I saw this book would be a book set in the same universe + boarding school + mystery? I just had to have it. I just needed to read it.

Sadly, I can’t like Charlotte, I wonder how she is even still at that school, if it is so prestigious as it is said it is. Then again, I can do a good guess and I think the word we are looking for is money. 😐
She seemed so ungrateful, people did try to help her, they did extend their hands for her to grab it, but instead she was acting all high and mighty.

Also Zoe. Bleh. What a terrible character. I can’t even believe she was so different not that long ago. I may have believed it if we had seen it with our own eyes, but now? Nah.

Also it was just ridiculously silly how she had packed everything, found a bottle, then was in the car with her mom and instantly changed her mind about where to go. It was just hilarious.

I just had no interest in her friends (though I did think they were pretty terrible friends). They are dead when the story starts so we just see what they are like through Charlotte and her flashbacks. I feel it would have been better had they all been alive. That their suicide would have happened as the story was unfold. Now I just didn’t know what to think of either Devon or Ariel.
Another option would be to have the first chapter be about the suicide and then rewind back to the time before it all happened. Before it all went wrong.

Plus the OMG suicide is so great message was pretty big in this one (sorry, but I would call it that as Charlotte keeps talking about joining them in the dark and how she wished she was able to do that). It was just uncomfortable and made me unhappy.

Ah yes, and the fact that they apparently drank alcohol like it was water (at least that is how it seems to me, considering they just had alcohol everywhere and didn’t hesitate to drink it).

So yeah, an anticipated read which failed to meet my hopes. Such a shame.