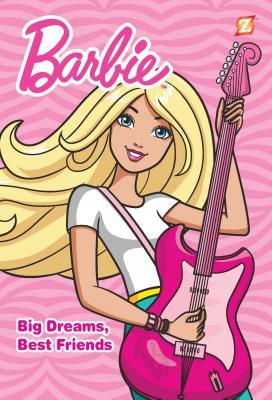 I spotted a second Barbie comic on Netgalley, and just had to grab it. I quite liked the previous comic (with the puppies), so I was hoping this one would also be fun.

Right from the bat I am giving -1.5 stars for the images. I will just say this: It needs more JPEG (sorry, I just have to use that reference/meme). My gosh, the pictures are grainy as hell, but the text bubbles above it are crystal clear. Most of the times I couldn’t even see what was going on it was that blurry/grainy. I do hope that this won’t happen in the final edition (or the paperback), because otherwise I wish the publisher good luck. 😐

I was pretty much stunned that until Drea bumped against Barbie, no one thought to help the girl with her stage fright. 😐 They just let her simmer, and just made some remarks about it, but then just left her alone. Whut? I am glad that these girls bumped against each other (even if it was a bit of a big coincidence and a bit too convenient for the plot). As not only did it help our drummer girl, but it also helped Barbie.

Really, what was up with that outfit? Do they want the girl to look like an oversized turkey? And they let her go outside in that? Did they really think that would go so well? sighs

The ending (how everything was solved) was a bit too magical and POOF for me. One moment Drea is quitting, packing her bags, Barbie is still without an idea, and then there it is. Done. Fixed. Yay. 😐

So yeah, I am disappointed in this one. It sounded quite good, it had all the right elements for me (bands, touring, designing), and that is also a reason why it isn’t one star just yet, but it just didn’t work out.