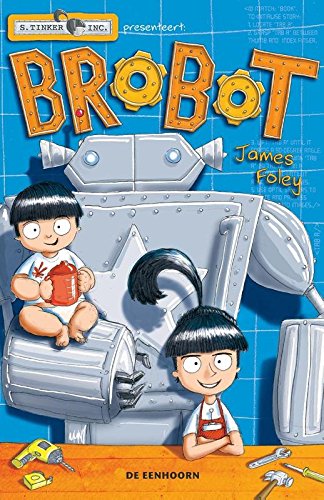 I read this book in Dutch, but will be writing a review in English.

A book about brothers, sisters, and robots!

The book is about Soesja (really who thought this was a good name in Dutch? Sally works way better considering I never heard of Soesja.) and she tells us about her new robot, about how much better he is than her little baby brother who is pretty much a health hazard and a building failure (yes, our girl looks at things in how well they are build).

I can kind of agree with her, though at times I found her a bit mean towards her brother. Then again, he does let go of some deathly poo bombs that probably will destroy the world. 😛 And he does seem to break things just by looking at them (really, you let him go for a few seconds and bang chaos everywhere).

Her brobot was a pretty great invention, he can do pretty much everything and has a great way of prioritising what is important and what is not (like with the baby he first went for the nuclear shirt, then the bomb in the diaper, and then whatever else was left). But like with any machine he seems so awesome at start but if something happens that isn’t on his scanner…. well… read the book to find out.

But thanks to what happens near the end our sister finds out that her brother isn’t so bad though. I was really delighted with the ending and how sweet she was. I am guessing they will still have their arguments, but I think they will be closer thanks to all that happened in the book.

I loved the fact this book was a graphic novel, I don’t think the book would have had the same impact if it was just text with some illustrations here and there.

The art was really great, though I had a laugh at Soesja (again, that name) and her pony tail. 😛

All in all, I want more books with this sister and brother. I want to see more of her inventions.