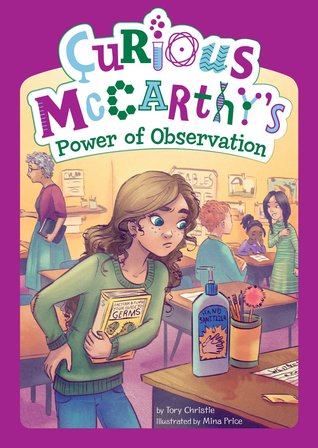 Well, this sounded much more pleasant than it actually was. There were a few things I liked, but also a ton of things I didn’t like.

So first up the things I did like:
-Our MC’s name. She is called Curie, but people nickname her to Curious (because she is, yes, curious). I also like the other names of the sisters and brothers.
-The fact that our MC has such a clear view of what she wants to become, and also tries her best to do scientific stuff. She seems a bit daunted by the fact she will have to read a lot, but she is still going for it.
-The illustrations. They were really fun, and quite pretty.
-The footnotes were nice, buttttt….. (see bad side).

The things I didn’t like:
-How incomplete/inconclusive this book felt. There were several things that felt like it was supposed to be a bigger book. For instance the food problem with the kids (also was surprised at the fact the table had drawers, you don’t see that a lot). The whole time it seems like it was going to be solved, someone would undertake action, but then nothing happens. At all.
Plus hello, doesn’t anyone clean that house? Those drawers? I am sorry, but there must be a very bad smell emanating from the drawers by now, but no one notices? Or at least notices it enough to check it? Whut?
The whole reading / not wanting to read. Again, it feels like there was supposed to be more to it, but then it just never came.
-The way the adults reacted to Curious. I didn’t get the big BOOHOO about her drawing with her marker on a book. Yes, it is bad, but it wasn’t as if she did it on purpose. From what I could read she was just startled while holding a marker and accidentally drew over the page. But, no, immediately she gets kicked out of the class and dragged to the principal, as if she committed mass murder. Yes, damaging book is NO, but she did it on accident, really…
Then there is the whole thing with the library, and I hated that old guy who just didn’t want to listen to what she had to say, he immediately assumed it was her, and that she should be more responsible. HELLOOOOO didn’t you hear her? And does she really seem the kind of girl who would do that to books? sighs How do you turn kids away from reading completely, by doing this crap.
-The sisters. I was just annoyed with how they treated Curious.
-The footnotes. Yes, they were fun, but also really distracting, in the end I just skipped reading them and focused on the story.

So all in all, I just can’t rate this book higher than 2.5 stars.