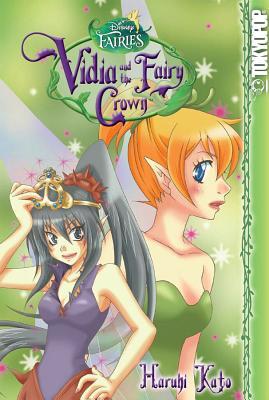 Oh boy, oh boy, this was just too good. I am so glad that I went with my gut instinct and clicked on the read now button. I was at first not sure, I wavered a bit. Why? Because this is about Neverland, about the fairies, and I was worried one particular little bitchy fairy may make an appearance or even have a big appearance. Namely Tinker Hell.

Thankfully Tinker Hell apparently doesn’t have a lot of appearances in this one, though I was definitely not liking her actions when we did spot her. Bleh. Terrible girl.

This book is all about Vidia. A pretty deredere fairy who lives alone from the main tree. I just adored her from the first time we see her. She is a bit grumpy, but I just adore that. Everyone else is so cheery and glittery and happy happy. Vidia at least shows her feelings, she isn’t afraid to be different. And yes, she may have to stop being so angry at everyone, and maybe scaring fairies isn’t nice (unless it is Tinker Hell, then I am all agreeing), but I could also see that she is just acting. Actually she cares. She cares a lot about her fellow fairies. Why else would she care so much about that crown. I mean, if she really wanted to leave she would have accepted the false accusations and just left. Instead she went on a mission with one of her friends and went to find that crown.
I also loved that she looked so cool and then used endearments like: sweetheart, love, dear. 😛
Yep, Vidia is my favourite fairy of Neverland!

The mystery of the crown, and their journey to find it was definitely fun. It also showed us various other fairies and swallow men, and showed where they worked and what they did. Boy, I am kind of glad I am not a fairy with laundry talent, dear lord, I don’t want to think of doing laundry all day every day. And not just my own, but everyone’s laundry. Eurgh.

I didn’t quite like the other fairies and how quickly they were accusing Vidia. I know she is a bit of grump, but come on, this is just rude. 😐 But I was glad that there were a few who knew Vidia better and knew she was just acting tough.

The art is fabulous, I so love the style. OK, the eyes were a bit yandere and thus creepy, but that is the only thing I didn’t entirely like. The rest was just perfect. I loved that Vidia was drawn all cool and tough, unlike most of the other fairies who were drawn bubbly and cute.

Extra points to the Diary of Cute Little Fairies at the end. I really loved those.

All in all, I want more Vidia manga! Give me!