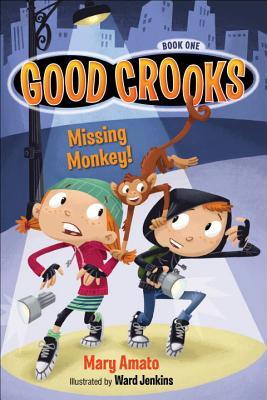 Review for: Missing Monkey, Dog Gone, and Sniff a Skunk. I am combining them as they feature mostly the same elements.

A family full of crooks, or are there some good apples in the mix? Add to that some monkey business, a famous dog who can play dead like the best, and a skunk with a stinky problem.

So last night I couldn’t sleep so I decided to check out some books I wanted to read, and this series was one of them. Due to me not being able to see the number on the cover + not really in the mood to get out of bed and grab my phone from the other room/or start my PC, I decided to just read it randomly. So book 1 > 2. Book 2 > 3. Book 3 > 1.

I can say that it wasn’t that much of a problem to read the books out of order. You could still easily understand the story. Sure the whole “Are our parents really our parents?” thing was a bit confusing as in book 1 it wasn’t mentioned, book 2 had a bit about it, and book 3 was about it fully.

Our MC’s are the twins Billy and Jillian. Well, OK, the official MC is Billy, but Jillian is around so much I will see her as the MC as well. Billy is the not so smart twin, though he is an animal whisperer (it seems) + he has some awesome ideas. Jillian is the smart one, she invents things left and right and she is the one who generally makes the plans. I really liked both of them, they made a good team. I loved that they were eager to do good deeds and went to great lengths to do them. Even if it meant disguising themselves and fending off their no-good parents.
I loved how they kept foiling their parents plans, or making things right again. Like with the cake, or the zoo, or the dog.

Sure, they had to at times do stuff they didn’t like, so that their parents wouldn’t be too suspicious. Or they had to make up a lie when they were almost caught with doing a good deed.

Each book features an animal. The first book is about a monkey named Razzle (who was quite annoying and I didn’t like him at all). The next book is about Poochie (a famous dog whose only good feature was playing dead. As Billy also said: “I know what to get this dog for her birthday,” I told Jillian.
“What?” Jillian asked.
“A gravestone,” I said. “Playing dead is the only thing she likes to do.”. And the last book is about a skunk (who lost her family and is being bullied by squirrels. Our duo is trying to teach her to be more of a skunk).
I am quite curious what the next animal will be, or if the author will just throw out the theme entirely. 😛

As I said at the beginning, this book also features the theme of: Are these our parents? And we see them search for answers. I am quite curious to see how this theme will end, I am guessing in the next book we will find out more, or maybe even see those real parents.

The book is also full of hilarious illustrations that made reading it even more fun.

All in all, I quite enjoyed this series and I will be waiting for the next book!