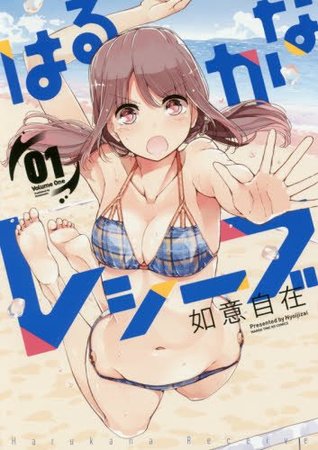 I saw this one would be getting an anime adaptation and so I had to check it out. Even if, normally, I am not a big fan of sports anime/manga.

At times it was just a bit too unbelievable. This girl is a total beginner but can handle her own against 2 champions. She volleyballs as if she has done nothing else in her entire life. Really, she transfers to live with her cousin, sees the beach, sees a volleyball court, and is instantly playing volleyball like that is her life calling. It just stood out a bit too much and was just a bit too weird for me.

Also who the hell just strips to her bikini in an instant when spotting a beach/sea? I know she is with her family, but this is family she hasn’t seen in a while + it is still a pretty public place. It did have me chuckling a bit.

Add to that the art which switches from having the girls be underweight/super-skinny and not having too much boobs, to them having belly, hip-fat, and boobs. Especially in the close-ups their bodies seem to just get sexier.

And also it is just mostly sports sports and more sports. There are just a few moments in there that aren’t about sports. I loved those moments. I did like that they showed us how beach volley worked, and how training worked, but it just didn’t hold my interest. But then again, that was expected since I am still not a big fan of sports anime/manga.

Of course there is clearly a bit of yuri going on, and so far I haven’t even seen a guy anywhere. 😛 Is this like Love Live and are men a rare breed?

All in all, it was still a nice volume, so 3 stars. I would recommend it if you like sports manga/anime, especially beach volley and don’t mind that it is a bit unbelievable, then be sure to read this.