Zombies, apps, and a story that could have been more and better. 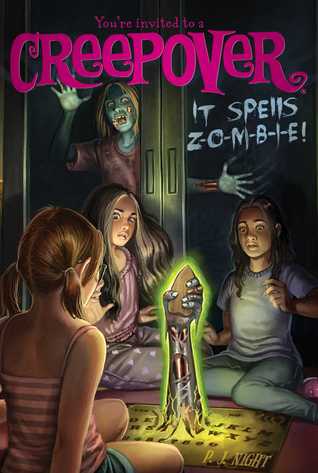 Yep, this was definitely a disappointment. The blurb makes it all seem much much more. There is a small kernel of truth in the blurb, but most of it is over-dramatised, which is just a shame. Plus the zombies? Eh, not that scary. Add to that the cover which makes it seem like zombies are just knocking on their door….

This one is on the highest scale (Never sleep again), but I was pretty much bored throughout the whole book, and the ending just finished the fact that this just wasn’t the best book in this series.

It started off pretty well, until the overly silly stuff by Emily who just pees in her pants at the mention of a zombie. After that the book goes downhill. I was just annoyed with Emily and found her being too overdramatic, but I guess it had to be added so the later parts would seem cooler somehow (notice the word seem).

The app was an interesting idea, but I don’t really get why everyone would play it so frantically. It is just a crappy app, and I was laughing at the fact everyone was just playing it like they needed it in their lives.

I loved the friendship between the girls, and wished we had seem more of it. I do feel that Leah may have stopped being friends with Emily eventually, maybe incorrect, but I have seen this trope too many times (Popular girl being friends with less popular (and a bit weird) girl).

The ending? Eh, it was typical for P.J. Night, but I think it frustrated me more than it normally does. I was just so happy, so hopeful, and then BANG. 🙁

I will still keep on reading this series, even though the books barely come out any more. Why do I keep reading? Because this is just one rare series with horror/scary elements out there that tells a new story with every new book.