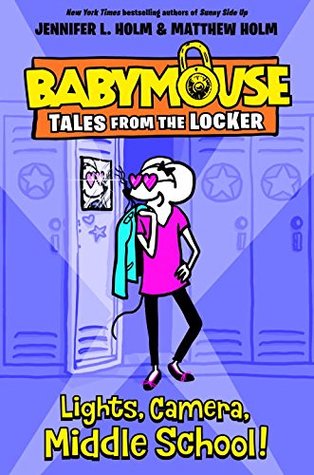 Welp, this started off pretty decent, but I quickly grew tired of Babymouse.

She was annoying, bossy, and I just wanted to throw into a lake. 😐 Even before the film started and her head was filled to the brim with that movie.

Plus I hated how easily everything was just magically resolved. It just felt too convenient. Oh yes, we have to get on with the movie, let’s just say x and y and be done with it.

Felicia and Henry were also way too urgh. My gosh, people you are in middle school not in a real film production, so get your head out of your ….. . I just found them a bit too much over the top. I feel sorry for the producers/directors if they continue acting when they are adults.

Also I am a bit confused about the animals/the world. So we have Ducks, Cats, Giraffes and more just walking around being human, but then there are normal elephants and geese that are animals? Plus pets? What? How does that work?

What I did like? The combo of comics with normal text and illustrations. That is also what kept me reading.

The movie (not the whole ego stuff, but the script/idea) was a fun one. It was indeed quite an epic story, and I was impressed that Babymouse was able to create the script, I was already worried since she seemed to have start-up problems.

Plus it was fun to see them having to find suitable locations as they couldn’t just go to India or Paris. And to see how they handled certain scenes.

But all in all, I won’t be continuing this series. It had good moments, but it also had too many not good moments. 🙁