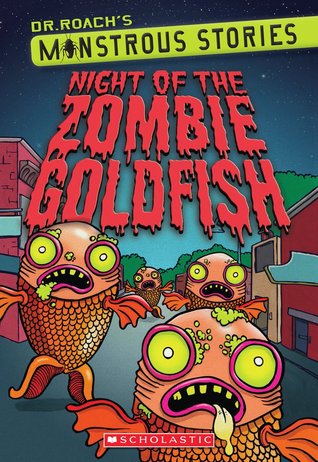 Haha, this was even more fabulous than I had hoped it would be. I enjoyed each page, and the story was just hilarious. Zombie goldfish ahoy!

Welcome to an ordinary town. Two ordinary boys (well ish). A couple of ordinary goldfish…. or are they? dum dum dum

It starts as most of these books do, you just know it is about to go wrong. But even if it is predictable you are still eager to find out how badly it will go wrong. What will happen because of such a mistake? Will it be fixed? Or will the entire town go under!

The zombie goldfish were definitely terrifying (though also a bit hilarious, no no, don’t bite me) and I kind of had hoped that they would do a bit more damage (sorry, I just love monsters). I wouldn’t have minded seeing them make their army bigger (now that would have been so much fun).

Unlike many scientists (kids or adults), Judd was a swell, friendly guy. He also knew he had made a mistake, and wasn’t afraid of fessing up. I loved that he instantly went to make an antidote (man, that little guy is fast). I am kind of curious what other inventions he made/tried to make.

Zak was a fun guy, though I did feel sorry for him numerous times while reading. He is the sidekick, and those of us who have read enough books about sidekicks…. well, we know what he has to do to help his friend. 😛

The book is also filled with fun, hilarious illustrations. I loved how the zombie goldfish looked (properly scary even with some scary teeth).

The ending was fun, I loved the little twist and I wonder if that will come back in the next books.

All in all, I enjoyed this one a whole lot and will definitely see if I can get the other books in this series as well.