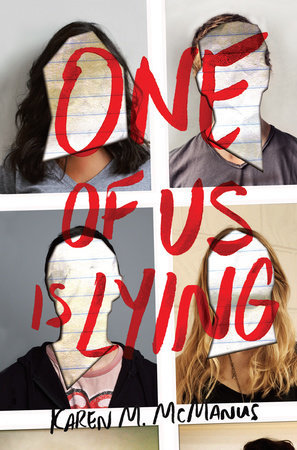 I will be trying to write a review but it may be a bit chaotic. I am still flailing around because this book was so epic.

I first want to get one thing out of the way. The big reveal. I will put that under spoilers. Don’t read this if you haven’t read the book. There is a reason why I am putting this thing under spoiler tags. It may be a bit chaotic, but I am still feeling all urgh about it.


Not to mention that I was pretty pissed off at the police and how they treated the investigation. Simon made a big app full of hurtful words and gossip, yet they only focused on the 4 students who were in the room with Simon. I mean really? Anyone could have done it. There are various people whose lives were destroyed because of Simon. The entire school is a big suspect. 😛
Also the way the police just leaked everything in the public without regards to the situation, or the fact these characters are all underage, it was terrible. Someone should fire those guys.

The characters? We have 4 of them. I liked them all. Well, OK, Addy took some time before I liked her and that mostly had to do with one big event that caused her to have to think for herself for once.

Bronwyn (I just adore her name): Our smart girl. I have to say at first I thought her secret was way worse (sorry, read too many books in which that outcome does happen). I was worried she may be stuck-up and snobby, but instead she was a sweet girl who would do anything for a friend. I could understand why she did what she did (her secret). Oh no, I am not saying it is OK to do that, but I can understand. She has a lot of pressure, her family expects a lot from her, and I can imagine that someone may crack under that.

Addy: The princess (at least at first). It took me some time to get used to her, and I especially started to like her when x happened which caused her to finally show her true colours. And boy, I loved her true colours. She was so much more fun, interesting. She shouldn’t hide those true colours any more. Her relationship with Jake? Eh, I have to say I didn’t like Jake, especially when we saw how controlling him was. At times they looked quite cute together, but it was only looks.
Her secret? Well, I am not really approving of it, but in a way I can also understand how it came to that.

Cooper: The jock. I loved him instantly. His accent, the way he acted/reacted. The way he worked so hard to get better at his sport. His secret? I have to say I didn’t see that one coming, but it was a happy surprise, and so I was cheering for him. I knew his grandma would accept him (she seemed that type), but I was worried for how the rest of his family, how the rest of the world would act. At times he was a bit too cocky at times, but thankfully he always landed back on earth.

Nate: The Criminal. Yep, the criminal. He has done some stuff that is wrong, and at the beginning of the book he is still doing some stuff that isn’t good when one is already on probation. I was quite happy to see him change as the book continued. He has the roughest life of all the characters. A mom who isn’t around. A drunk dad. Bills that need to be paid (and the dad sure isn’t going to do it). No one to truly rely on. It must be tough. 🙁
Also an extra <3 goes to his love of Japanese (horror) movies!

There is also some romance, and while at first I was worried it wouldn’t fit, later on in the story I just loved it and I was rooting for those 2 to finally be together without getting in trouble.

The book switches between the 4 characters. It is done really well. Quite often it may turn chaotic and even more often the characters feel alike so that they all just flow into each other. But not in this book. Each character has their own voice. I didn’t mind that the POV switched so many times. Instead I enjoyed it. Extra points to go to this!

I loved how the secrets were told slowly. It wasn’t done in a BANG, but instead as the time passes you find out more and more about the characters, they will be dropping some hints as to what their secret is, and then when the moment is right. Reveal!

The ending was terrific, exciting, OMG, and I was just flailing around.

Also I love how the title still fits so perfectly.

This is a book that won’t let you go even after you read it, and you definitely won’t be able to stop reading. It is a page turner. You really really want to know what happened to Simon (even though I hated him), who the real culprit is, why stuff happened. I would highly recommend this book to everyone!