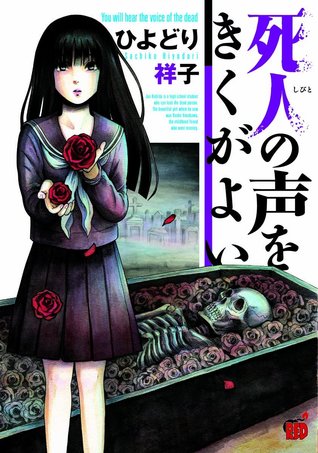 Another manga in the quest to finding something akin to Zekkyou Gakkyuu.

After reading it though, I can say that I am not sure why I even continued with this manga. Why I read a whole volume of it. It wasn’t bad per se, but it wasn’t good either.

It mostly had to do with how gruesome and disturbing everything was (I was noping my way out of everything while reading). Faces ripped clean of someone’s face, monsters going up someone’s anus, arms being chopped off, do I need to continue? No, you lost your appetite? Welcome to the club.
Maybe if I read this one years and years ago, back when I also still could watch Elfen Lied without puking or just feeling faint, maybe then I would have loved this one. As of now… nope.

The stories/chapters are quite short, at times are interesting (despite the gruesomeness), but mostly they are just weird and over the top (like with the island? Or with the kappa stuff?).

The stories/chapters also seem connected in the way that time passes, we see them talk about older stuff that happened before, and some other stuff, but it also seems disconnected (due to the stories and how weird they are). Plus I just can’t imagine why anyone would stick around in a club when their president just pulled a gun on them in another story. I would just nope my way out of there and stay far far away from that crazy lady.

Most of the side-characters are terrible. Especially the girls. It isn’t until the later stories that I actually found 2 girls that I loved. They were really kick-ass (the mom, and the girl who came along to that creepy house). But other than that? I just wasn’t rooting for any of them, and that is a bad combo in a horror story like that. You generally want to root for people. 😛

Of course there are some typical horror cliches going on (like splitting up, yeah, that sounds like a good idea).

The MC is pretty wishy-washy, he really needs the help from his dead friend to get out of most situations which is pretty sad if you think about it. 😛 And yes, he can see the dead, which also doesn’t help with the wtf factor of this manga. Plus, boy, first rule in seeing the dead, you shouldn’t talk about them/to them/follow them if there are other people around. For now people just think he has issues with getting over the death of his best friend, but I wonder how long that will last before they will call a doctor. 🙁

The dead best friend? I loved her, though I wish we had found out a bit more about why she is sticking around on earth, since it seems her things are done (her backstory is out of the way). Maybe she is just worried her best friend will quickly join her if she doesn’t stick around, and considering all that happened, I would also stick around if my best friend was like our MC is.

The art is so-so. At times it is quite ugly, and at times it looks quite awesome.

But I am not sure if I want to continue. If the gruesomeness was toned down, if the stories made a bit more sense, and if the MC started to gain some balls, maybe I would continue, but for now, I am saying no to this series.