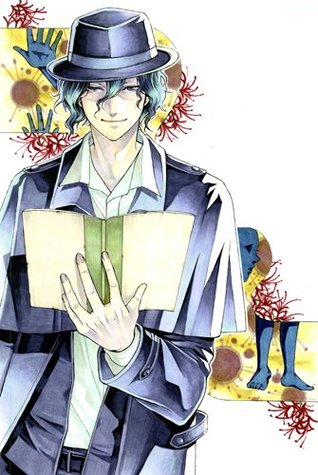 I was looking to find something a bit akin to Zekkyou Gakkyou, and I found that in this one.

It is just a shame that this one is only one volume, I wouldn’t have minded seeing more of this guy’s travels and the stories he is collecting.

There was at least one story that had me NOPING the hell out of everything, and that was the one with the dolls. I am just not a big fan of dolls, especially dolls that have parts that can move (and will move). I was really creeped out when that doll’s eyes started to turn around, and it only made it worse that there was something else in the room with the doll and the girl. Yep, NOPE.

The other stories were also decent creepy, some show some old folklore, like the story with the girl who finds something out about her house. We also learn that breaking promises with a monster is a big no-no (though I could have told you that before everything happened). The most heartbreaking one was the Kappa story. And the one that had the best twist was the story about the girl and her family (I certainly didn’t see that coming).

Apparently the last stories (Demon before and Demon after) are about the narrator/guy who collects these stories, at least, I didn’t see it as that, but if I read the comments I can find about those stories it seems to be about him. I love that they wrote this backstory for him. Even in a short volume like this, to give the backstory to the narrator? Perfect. They could have easily skipped that, so it makes me happy that they didn’t. Even if it was hard to tell it was the story for the narrator. 😛

The art is also pretty decent. There were some things that were off, but generally the style fitted perfectly with the creepiness of the stories.

All in all, if you are looking for a short manga, and want some horror and gruesomeness, then be sure to read this one.