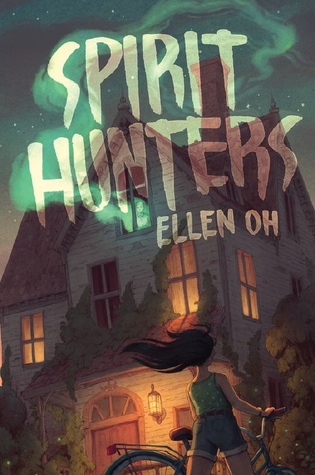 A creepy, haunting middle-grade book, the first in a series, and I definitely want more books.

This one lays the perfect foundation for a whole lot of creepy, spooky stories. I am always on the lookout for new horror/ghost stories, especially in the middle-grade/childrens range. Often those books avoid the scariness or weaken it as the story goes on. But not this one.

Oh no, I was definitely creeped out many times, and even NOPE NOPE NOPEd quite a few times (dang that spider/ghost thing on the walls and ceiling or that stuff in the attic). Yep, that is fuel for nightmares, especially with how well the author writes the scenes.

Not only do we have the sense of dread, the spooky house, and a brother (almost) possessed, but we also have a bit of memory loss and what those memories contain. I am really thankful that the author wrote them so well, didn’t hurry with the revelation, I would have been disappointed otherwise considering how big of a deal it is and how much it matters to the story.

Harper is a wonderful character, strong, brave, and I was worried about her, and also felt sorry for what happened to her, to her lost memories.

The house was positively spooky, and I was amazed that no one else seemed to notice. I know, I know, they don’t have any powers, but I would think anyone would feel the dread seeping from the walls. Not the least with how the little brother is acting totally out of character.

There were a few moments that were quite obvious (the ghost in the house, but also who the great spirit hunter was), but eh, it is still a childrens book. It wouldn’t be the first time that things like that are obvious.

Extra love go to Dayo, she was the best, and I hope we will see more of her (and hopefully she can help Harper out) in the next books.

Yuna, the mom, I am still not sure what to think of her. On the one hand I can understand why she did what she did, but on the other hand… I just can’t and I was pissy at her for a few parts in the book.

I loved it when those characters appeared in various parts of the story. Haha, yeah, I won’t tell you who, or what, as that would spoil something, and I don’t want that to happen.

The last chapters were a rollercoaster and I was on the edge of whatever place I was sitting. It was spooky, creepy, and I was afraid for Harper. Would she be able to do it? What would happen afterwards?

Highly recommended if you are looking for a spooky, creepy, twisty book with great characters.