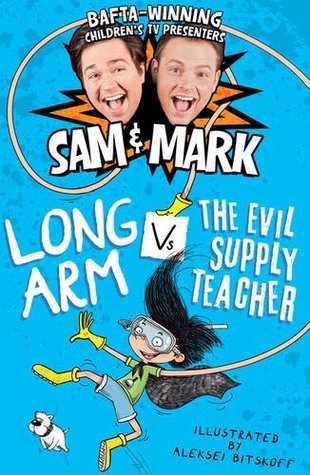 I read this one in Dutch, but will write the review in English. Which means I will be using the names as they are in Dutch.

So I was squealing in happiness when I spotted this book at Library #1. I was already wondering if there would be more Superarm books!

Robin, or Superarm, is back again, and this time he will have an even bigger villain to defeat! I really liked Robin, though I am sad to see that his test scores are going down because of his superhero stuff. 🙁
I love that he is very dedicated to his superhero stuff, but I hope he also finds a balance in his daily life. I had a lot of fun seeing him fight crime though. Or just save people from fleeing hippos (also important work).
Plus he is just such a fun character. He doesn’t let his superhero status go to his head. Oh no, not at all. He just stays the same, even in his superhero mode, and I love that. I have seen so many superheroes who suddenly go all in ego mode because they are so strong all of the sudden. Or who let the fame go to their head.
And he also still is friends with Simon, and doesn’t mind his best friend trying to help him. And when there is a new character in town, of course he tries to be friends with them!

The villain? What was going on? It was quite easy to spot. But still very well written, and I had a lot of fun reading about the characters figuring out the same things as I did. The villain was really fun, and even though I was supposed to cheer for the good guys, I noticed I was quite interested in this villain and was kind of rooting for them as well. 😛 I just can’t resist a well-written villain.

The battle at the end? Loved every bit of it! The twist was really fun (though disgusting).

Mr. Brinkman? How is he still a teacher? He is a terrible, terrible person, a horrible teacher, and I find it just disgusting that he can’t hold in his farts, that he opts for gassing his students. 😐

The fart show? I don’t get what is so great about it, and why everyone seemingly is so into it. To the point that they forego any activities around them. Plus I feel sorry for the jury at that show.

I am not to sure if I like the fact x happened to Robin’s x. They seem to be the annoying kind, and I hate those and that trope. Why the need to add that? I hope x doesn’t feature a big role, otherwise I won’t be continuing this series. Which would be a shame.

Of course the book, just like the previous one, has a lot of illustrations which definitely make the book so much more fun. Plus the battles are even better!

Oh, and I love how the Dutch title at least doesn’t spoil who the villain is. Unlike the English one. 😐 Is it really that hard to write a title that captures the audience but doesn’t spoil everything?

All in all, a great book and while I am hating that last element that was introduced at the end, I will still at least try the next book.