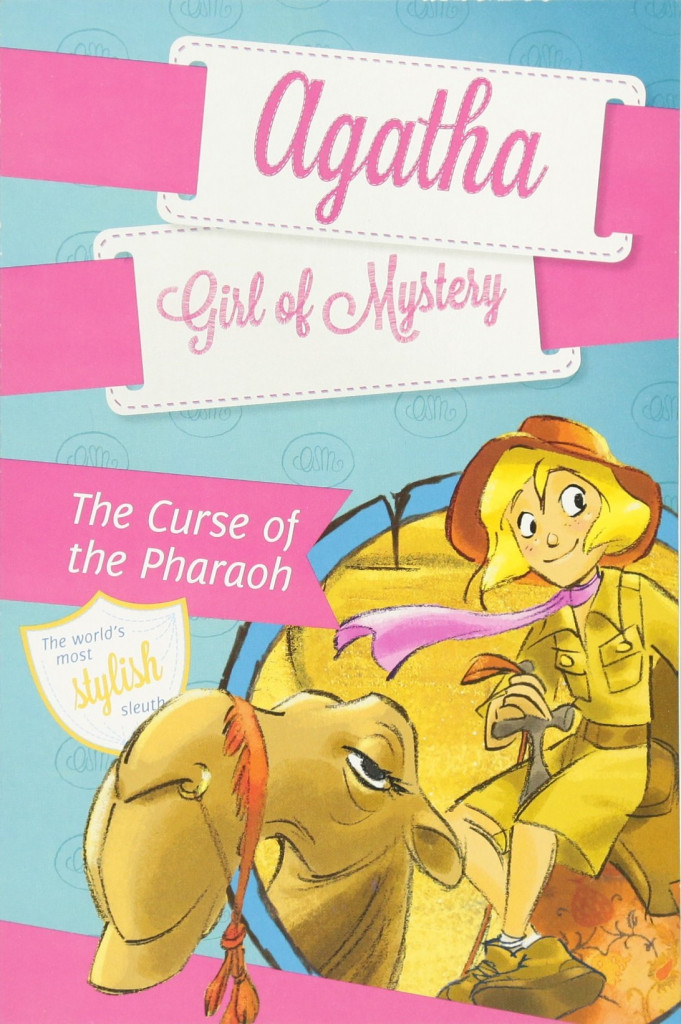 I read this one in Dutch but I will be writing my review in English.

So, I spotted these at Library #3 and I was immediately interested. Egypt? Mystery/Mistery? Girl Detective? Fun illustrations? Um, yes please. Sign me up!
I also saw that the library had 2 more books in this series (book 2 and 3) so I took those with me as well.

And in the end I quite liked this book, otherwise I wouldn’t have rated it a 3 stars. But there was also enough that I didn’t like, and I will address those first.

Let’s start with the fact this book doesn’t feel like a first book. Rather it feels like a book 2 or later. Why? Because when we meet Agatha, we do get an introduction but it feels more like a standard one that they always put at the start of a book in a series.
Secondly there was no real explanation why Larry is asking his little niece’s advice/help.
And then there is the fact that apparently it is just normal for a young kid like her to grab a plane, call an aunt in a far away country, and just travel. Whut?

Next up is Agatha and her magical memory. It just felt a bit too convenient to have her remember each and everything. It made the mystery seem too easily solvable. I know that there are people with such a memory, but I feel it would have been better if Agatha had to really think or consult books at the spot.

And lastly… Larry. Oh, Gosh, Larry. He was just terrible, horrible, lazy, a dunce, stupid, an idiot, and I could go on. I cannot imagine how he ever got to be a detective trainee in that fancy school of his. He needs his niece, and her butler to have the mystery solved. He doesn’t do a poop thing in this book, just makes stupid remarks, spills all the details to everyone about his mission, acts like a complete idiot. He really ruined the book for me, and I would rather have him gone from the book, or at least get some balls and a brain. Now the ending just felt unfair. He didn’t do a thing.

And now all the good!

The fact this one takes place in Egypt for most of the book. I just adore Egypt, still dreaming of going there one day (when it is calmer/less dangerous), so until then I will grab any book about Egypt and read about the pyramids, about mummies, mystery, and more. In this one we have a missing clay tablet that may lead to one of the biggest finds of the year. It was really fun to see Agatha travel across various favourite sights of mine.

The mystery. It was really well written, and I had fun trying to figure out who was the culprit, what happened to the tablet. Was it a thief? Or thieves? Was it done for the money? The fame?
The conclusion, the whodunnit revealed was great fun. That was a masterful plan, too bad they didn’t get away with it (not a spoiler, you just know that happens).

The Mistery family. It seems to be quite a mysterious and big family. Everyone is all over the planet. Parents are travelling (and sending petrifying cacti to their kid). And everyone has a job that is a bit weird (though I found them awesome instead of weird). I can’t wait to see what other jobs we will read about.

Mr. Kent. He was just so much fun + his body proportions made travelling an adventure. I had a laugh when he had to squeeze himself in the seat or when he had to travel by camel. I loved his dedication to the job and how sweet he was with Agatha.

Agatha was also pretty fun, and I loved her personality. Normal girls may not be so happy with a cactus for their 12th birthday, but she loved it (and already researched antidotes in case she got stabbed by it). Her being a bookworm? Of course that is another plus point for her. And even though she has a magical memory, I could also see that she could have easily solved the mystery without that magical memory. Her dreamjob? Loved it!

Lastly the illustrations. They are just so much fun and also those colours are lovely, though it seems to be a popular style of drawing in Italy (it is reminiscent of Thea Stilton and other Italian children books I read).

All in all, a pretty OK book, and I will give the series one more chance, but if the memory thing becomes too convenient, or if Larry just acts too dumb, I won’t continue. Such a shame, I was hoping I had found a new series.