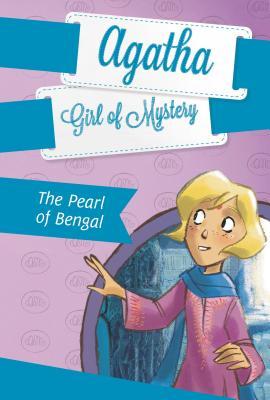 I read this one in Dutch but will be writing a review in English.

So, as I said yesterday in my review for the first book, I am giving this series one more chance. Well, that chance is now over. Sorry, but I am not continuing with this series. It has potential, but only if you remove the magical abilities of Agatha and if you remove Larry completely.

In this book we find out that not only does Agatha have a magical memory (really, can you stop saying it to us?), but also a magical reading speed. sighsSorry, but it is just getting annoying. I would rather have a heroine who needs to work a bit for her success.

And then there is Larry. Larry who once again just drags his niece with him to a mission, and once again doesn’t do a poop thing to help her. Instead he makes one stupid remark after remark and he just keeps showing that he doesn’t learn anything basic at that school of his. Bollywood? What is that? Other normal stuff people of his age would know… nope. Nothing.
Again he relies on his niece and her butler to help solve the mystery. Again his niece solves the mystery. And again…

Also, just like the first book, this didn’t feel like a second book. It felt like a book much further in the series, especially since they said that Agatha helped Larry with many missions.

I am also a bit worried that apparently Agatha doesn’t tell her parents she is just hopping around the world. 🙁

The book also had some good points, that is the reason I rated it a 2 stars.

For instance, the mystery was really fun. Not only to solve it, but also the way the mystery was written was engaging and fun. You really want to help Agatha solve the mystery. And every time you think that you may have solved it, BANG, a new twist will tell you it may not be so simple as you thought it would be.

Also the fact this story takes place in India and we read about the culture/cities/religion.

I also liked Agatha’s uncle. He was such a big happy guy. Though he may need to up his tact a bit, at times he was a bit too pushy. But I liked how he tried to connect to Mr. Kent.

Plus I liked how this book seemed to have been set in the past, but then there are things as cellphones, computers, wifi. It all just connected perfectly. It is not often that this works, but in this one it does.

Also I am still loving the illustrations. They make the story more fun, and make the characters a tiny bit more tolerable.

But yes, I am not going to read this series further, which is such a shame I was really looking forward to having a new series to enjoy.