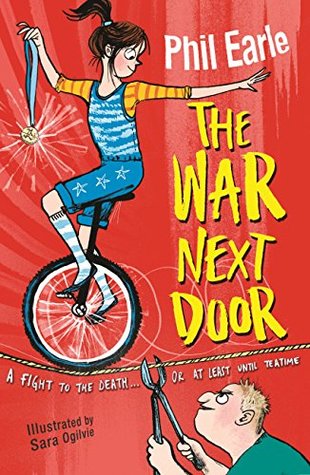 This one looked so fabulous, so fun, so interesting… sadly…

It was just not meant to be. I adored the first book, and so I was hoping this would be in the same vein as that one.

And yes, I could have stopped, but I kept hoping something would happen, something fun, something amazing. But all I got was magical redemption stuff, a kid who was more of an adult, and a kid with a nose that was just too much (I have nothing against people who look different, but I thought this was just too much of a plot convenience than something added to give diversity).

Jemina.. Ah, I wanted to like this girl so much. But she was a bit too chipper (nothing wrong with being happy, but not even crying or showing your true feelings is not my thing), a bit too motivational yoga instructor, a bit too much life-coach, and a bit too much adult. At times I had a hard time believing she was the age she probably actually was. So yeah, in the end? There were a few times I liked her (when she acted her age), but way too many times that she acted like she was a motivational help-book or an adult.

Masher. So, I guess I am supposed to like this dude? Weirdly, I kind of did, but I feel that it wasn’t really my emotion, but rather the book’s suggestion that pushed me that way. Plus it just seemed a bit weird that he would suddenly, by the words of life-coach Jemina, would change from Masher to Quentin. He suddenly had feelings, guilt, and emotions. Sorry, that is just a bit too unbelievable for me. If it wasn’t just Jemina, but also other people, then I may have believed it. But now? Suddenly after so many years of him being a bully? Nah. People don’t change so fast.

Maurice? Well, the award for most terrible parent goes to him. I don’t even want to waste more time on him.

The whole big scene with Masher x Jemina x Danny? I just laughed my butt at the cheesiness of it. The levels of that were certainly over 9000. 😛 And it definitely enforced my view of Jemina as a walking help-book or a life-coach cheering on for his client.

The only things I did like were the other members of the Jessop family (wish they had gotten more time in the spotlight), the wonderful illustrations, and also the narrator (and him continuing to make comments on the story).