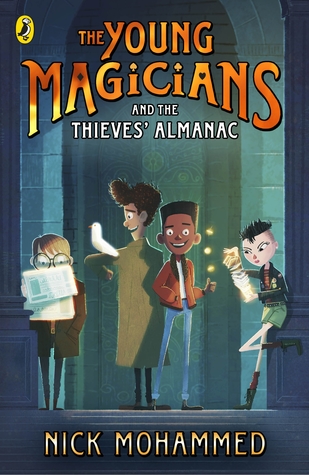 This was just a magical, fun book with lots of mystery, great characters and some interesting twists that had me re-think what I just read. 🙂

I spotted this book (miraculously) at Library #1 and just had to pick it up. It sounded like a book I would enjoy, and I was right! I enjoyed it a whole lot. Though, sadly, due to one element I didn’t rate this one the 5+ star I wanted it to rate. What that element was?

President Pickle. What a terrible, horrible person that was. He totally didn’t care about bringing in some young people in his group, instead he was being an absolutely terror about them. He was being rude towards all of them, especially Zack. And sorry, I am amazed that the Magic Circle was still alive with him as a president. I kept hoping he would just disappear (like a magic trick) but instead he got only more and more frustrating with each passing page.

The book starts off pretty calm (our quartet meeting each other and the start of the week at the Magic Circle), but we quickly see that there are things that are awry. A bank is robbed, and our quartet starts to snoop around to find out what is going on. How it happened without there being any trace of entry. I loved that there was something like a Thieves’ Almanac in the world.

We have four characters and I had 1 big favourite and one runner-up. Namely Sophie and Zack.
I loved Sophie for her powers, all the other guys had the standard-ish magician tricks (though Zack definitely trumped them all), but Sophie could manipulate minds and hypnotise. Which was totally awesome. How people didn’t even know they were manipulated/hypnotised, and how much it helped their cause in this book (though I was surprised it worked on that as well, she sure is awesome). So yes, her being a mentalist? Loved it! Plus she was so tough and kick-ass, we see that her home situation is definitely not the best (from the hints here and there), but she isn’t letting that stop her. It was pretty cool that she was living at a hotel for the time being, and again, by the powers of her mind. 😛

Zack was a fun character, I think I mostly liked him because I felt sorry for him and I was rooting for him. He is a pretty awesome magician, but some people may confuse his powers with stealing (though he always puts stuff back afterwards). I loved that even though he was accused of so many things, even though it wasn’t always fun, he just kept on going. I think if he keeps training and keeps practising he will be one hell of a legend of a magician! Someone that people will talk about for years.

Jonny (I kept reading his name wrong, namely as Johnny) was so said the tallest character, though if I have to believe the illustrations he isn’t that much taller than Zack. Sadly his “tallness” was constantly named and I got a bit annoyed. If you tell us a character is tall, then make him actually tall. 😐
But he is talented, he definitely inherited some of the awesomeness from his grandpa who is also a legend in many people’s eyes.
Next to his magic he is also a wizard with inventions. Especially his last invention was just pure epicness and I want to try it out as well!

Alex, my least favourite character. He was pretty great with cards and in the end also with lockpicking, but sorry, I was mostly just annoyed with him and how he thought. Insecurity is something I am familiar with, but I thought it was just too much in this book. He does get a bit braver, but I was mostly annoyed at how he kept whining about each and every little thing. All the other characters also needed more than one trick to show, but did you hear them complain? Oh no. Nope, not at all. They just went with it.

The ending? The whodunnit? I already knew who the culprits were, it was just too easy. But I didn’t mind it that much, it was still very fun to see our characters find out the same things as I did. Plus I loved seeing that person pop up, and then to see her have that accent? It made me laugh so hard.

Also the narrator ending? Boy, that really changed some things for me, I even flipped back to make sure it wasn’t a joke, and OMG, I didn’t even notice it when I read it. I loved that they added that.

The narrator popping up? It can be annoying, but it was really well done in this one. The narrator was funny, he didn’t exaggerate, plus he was quite helpful at times (explaining some of magic stuff, or giving subtle hints).

The book is full of details, even without the illustrations I could imagine the Magic Circle in detail. I could just see myself discover all the hidden spots, discover the library, and everything else. Though I am sure I wouldn’t want to be in the part with all the kids. Boy, that place sounds terrible and icky.

What else? Ah yes! The illustrations! With the exception of how un-tall Jonny was, I loved the illustration. The style fits perfectly with a mysterious and magic book like this.