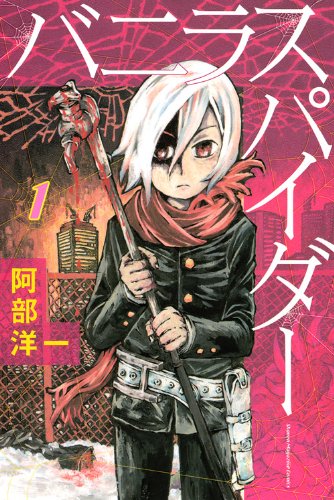 Ah, another weird, silly, wtf is going on and why, slightly gross manga by Youichi Abe. I love it!

I loved his other works (Chimoguri Ringo to Kingyobachi Otoko, Daidai wa, Hantoumei ni Nidone Suru) and was already hoping I would have a chance to read this one! And today I had the chance.

Imagine a world where the sky is filled with spiderwebs, and from which man-eating aliens (spiders) come down to munch on some delicious human meat (while taking over some people and using them as hosts). Yep, this sounds a lot like NOPE NOPE NOPE? Right? Well, apparently the people in this country are used to the webs, don’t care/don’t see/don’t know about all the people who are murdered/disappeared/act weird. It is quite intriguing that apparently people just don’t mind, that people just continue their daily lives like nothing is going on.

But there is one boy who cares. He has a girl he loves/likes and he is willing to go very far to keep her safe. And yes, this means that he is stalking her all the time, is planning on buying some stuff so he can listen in on her… Yep, it sounds creepy, but considering what the man-eating aliens do… I would say it is also quite valid and legit. I would probably do the same thing.

This boy is also quite special. He is like a ninja, automatic doors don’t notice him, people just bump into him because they didn’t know he was there, he can just hide in plain sight. It isn’t a skill he always loves/loved, but with the aliens and his fight against them it comes quite in handy.

Of course, in pure Youchi Abe fashion, the weapon of choice isn’t something like a sword, or a gun, or anything else that is just normal. Oh no. Our boy is stuck with a faucet (including a pipe). Yep, a faucet. And a pretty dang strong faucet at that. I was pretty amazed actually that the thing was so awesome. I thought it would just break in one hit. 😛 I guess I should have trusted Mr. Tsuda’s words more.

Yep, Mr. Tsuda, or Ms. Tsuda depending on the day and if his suit works. 😛 That is all I will say, you will have to find out more by reading the manga. But I loved his character, and I am curious what he is, and how he knows all these things. Plus his home/ship is just hilarious, especially when it rains.

There are great battles though (bloody and a bit gore battles), man-eating spider NOPE aliens to be killed. But there is also conscience (because those aliens are using humans as their hosts, and what if you kill someone near someone who knows that former human), there is also the worry. Is this all worth it? Will it all be better? How long will he have to protect his girl?
And of course with the addition of our hero and the girl he has to protect… there is also a bit of romance, mostly one sided because the girl is really dense/oblivious to it all. 😛 I do hope that we will see more romance in the next volumes and that the girl also sees the obvious love flooding from the guy.

I am also liking the convenience store girl, I hope she will be playing a bigger role in the next volume.

Plus the fact that the more you read the more you find out about the aliens/spiders, though also gain a lot more questions. Though knowing Youichi Abe we will get all the answers in due time. I will be waiting eagerly (but patiently) for them.

Oh, oh, and I am guessing all the stories by Youichi Abe are connected in a way? There is the police men with eye patches, the giant girl is also around, and there are several other things that hint to a connection with other series. Or the author just loving those characters and adding them in everything, that is also a possibility.

All in all, I can’t wait for more of this series, and I would recommend it if you don’t mind silliness combined with supernatural/sci-fi and a bit of gore.