Happy Monday everyone! It is the start off a new week, and I got just the thing to start this week off with a blast, namely a Nerd Blast!

For today’s post I got information on the book and the author, an excerpt (poor Amy Anne!), and a giveaway which is open to everyone in the world (yay!). 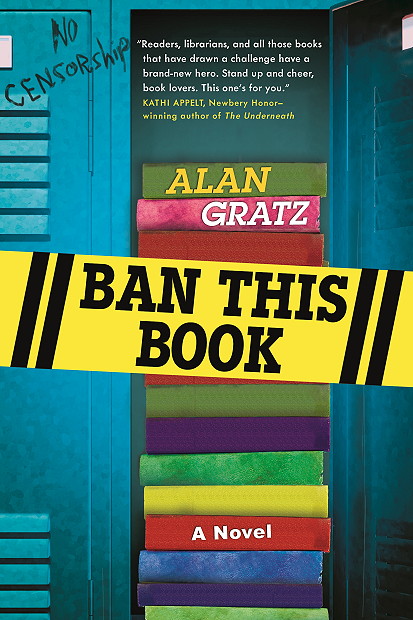 An inspiring tale of a fourth-grader who fights back when her favorite book is banned from the school library–by starting her own illegal locker library!

It all started the day Amy Anne Ollinger tried to check out her favorite book in the whole world, From the Mixed-Up Files of Mrs. Basil E. Frankweiler, from the school library. That’s when Mrs. Jones, the librarian, told her the bad news: her favorite book was banned! All because a classmate’s mom thought the book wasn’t appropriate for kids to read.

Amy Anne decides to fight back by starting a secret banned books library out of her locker. Soon, she finds herself on the front line of an unexpected battle over book banning, censorship, and who has the right to decide what she and her fellow students can read.

Reminiscent of the classic novel Frindle by Andrew Clements for its inspiring message, Ban This Book is a love letter to the written word and its power to give kids a voice. 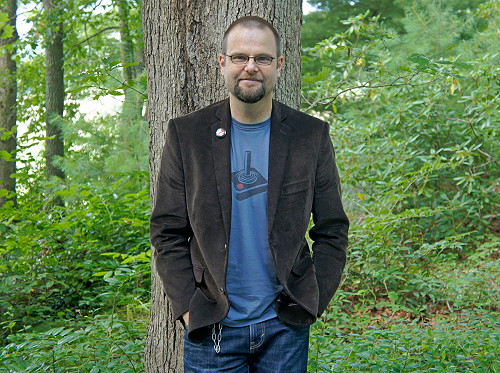 Alan Gratz‘s first novel, Samurai Shortstop, was named one of the ALA’s 2007 Top Ten Best Books for Young Adults. His second novel, Something Rotten, was a 2008 ALA Quick Pick for Young Adult Readers, and was followed by a sequel, Something Wicked, in October 2008. His first middle grade novel, The Brooklyn Nine, was one of the ALA’s Top Ten Sports Books for Youth and Top Ten Historical Books for Youth, and his middle grade Holocaust novel Prisoner B-3087 was one of YALSA’s 2014 Best Fiction for Young Readers and has won seven state awards. His latest novels are the YA thriller Code of Honor, a YALSA 2016 Quick Pick for Reluctant Readers, and The Monster War, the third book in his middle grade steampunk League of Seven trilogy.
Alan’s short fiction has appeared in Alfred Hitchcock’s Mystery Magazine, online at Tor.com, and in the anthologies Half-Minute Horrors and Tomo: Friendship Through Fiction, which benefitted victims of the 2011 Great East Japan Earthquake and Tsunami.

As the first Artist in Residence at the American School in Japan in 2010, Alan spent six weeks teaching historical fiction-writing to middle school students in Tokyo, and he was the Thurber House Children’s Writer in Residence in 2011, living and writing in James Thurber’s attic for a month while working with young writers from all around the Columbus, Ohio area.
In addition to writing plays, magazine articles, and a few episodes of A&E’s City Confidential, Alan has taught catapult-building to middle-schoolers, written more than 6,000 radio commercials, sold other people’s books, lectured at a Czech university, and traveled the galaxy as a space ranger. (One of these, it should be pointed out, is not true.)
Alan was born and raised in Knoxville, Tennessee, home of the 1982 World’s Fair. After a carefree but humid childhood, Alan attended the University of Tennessee, where he earned a College Scholars degree with a specialization in creative writing, and, later, a Master’s degree in English education. He now lives with his wife Wendi and his daughter Jo in the high country of Western North Carolina, where he enjoys playing games, eating pizza, and, perhaps not too surprisingly, reading books.

The Mystery of the Missing Book

It all started the day my favorite book went missing from the library.

I didn’t know it was missing. Not yet. In my mind, it was still sitting there all alone on the shelf like a kid in the cafeteria waiting for her one and only friend to come and find her. Waiting for me to find her. All I wanted to do was run to the library and check out my favorite book before homeroom, but Rebecca, my one and only real-life friend, was still talking about trademarking our names.

“Have you ever thought about registering AmyAnneOllinger.com?” Rebecca asked me.

“No, Rebecca, I have never thought about registering AmyAnneOllinger.com. I am nine years old. Why in the world would I bother to register a Web site with my name on it when my parents won’t even let me use Facebook yet?”

That’s what I thought about saying. What I said instead was, “No.”

“You should,” Rebecca told me. “You’ve got a unique name, but even so, somebody could register it, and then what would you do? RebeccaZimmerman.com is already gone! I’m ten years old, and already my future intellectual property is being snapped up! Jay Z and Beyoncé trademarked their baby’s name less than a month after she was born. You’d think my parents would have known enough to do the same.”

Rebecca’s parents were both lawyers, and she wanted to be one too when she grew up. I couldn’t imagine a more boring job.

I was still itching to get to the library and check out my favorite book. I opened my locker to stuff my backpack inside and gave my mailbox a quick look. Nobody knows how it got started, but everybody at Shelbourne Elementary has these cardboard boxes taped to the inside door of their lockers, just below the little vents they put on there in case you get stuffed in your locker by a bully. If you want to leave a note for somebody you just slip the piece of paper in the slot and it falls right into the little cardboard box. It’s such a tradition that Mr. Crutchfield, the custodian, just leaves the boxes in the lockers from year to year.

As usual, my mailbox was empty. Which I’d expected. My one and only friend doesn’t believe in writing notes. “Never leave a paper trail,” Rebecca says. More advice from her lawyer parents.
“Did you hear about Morgan Freeman, the actor?” Rebecca asked. “Somebody who wasn’t named Morgan Freeman registered his name at morganfreeman.com, and he had to sue them to get it back! Now that’s an interesting case—”

“I can’t imagine anything less interesting, Rebecca! I don’t care anything about trademarks or registering domain names. I have to go check out my favorite book before somebody else does!”
That’s what I wanted to tell her. Instead I held up a handful of books like a shield and said, “I have to return these books to the library before class!” and backed away before she could tell me more about the court case. “I’ll see you in homeroom!” I called.

Normally I would already have my favorite book checked out and in my backpack, but our librarian, Mrs. Jones, has a rule that you can only renew a book two times in a row, and then it has to sit on the shelf for five whole school days before you can check it out again. She says it’s to make sure other people get a chance to read it, but I think she made that rule up just to make me read other books, which I would have done anyway.

I dumped last night’s books in the book return and waved good morning to Mrs. Jones on the way to the fiction shelves.

“Just let me grab my book,” I called back. I turned into the H–N shelves and hurried to where I knew my favorite book would be waiting for me.

Only it wasn’t there.

I looked again. It still wasn’t there. I looked behind the books, in case it had gotten pushed back and was hidden behind the others like they sometimes do, but no. It really wasn’t there. But my favorite book was always on the shelf. Could somebody else really have checked it out?

I was about to go and ask Mrs. Jones when she turned down the row. Mrs. Jones is a big white lady with short brown hair and rhinestone granny glasses that hang around her neck on a chain when she isn’t reading. Today she was wearing a red dress with white polka dots. Polka dots are her thing.

“That’s what I was trying to tell you, honey,” Mrs. Jones said. “I knew you’d come in for it first thing.”

“It’s been five days,” I told her. “I marked it down on my calendar. I get to check it out again after five days. You said so. Did somebody—did somebody else check it out?”
“No, Amy Anne. I had to take it off the shelf.”

Mrs. Jones sighed and wrung her hands. She looked like she was about to tell me my dogs had died. “Because some parents got together and said they didn’t think it was appropriate for elementary school, and the school board agreed with them.”

“Wasn’t appropriate? What does that mean?”

“It means I can’t check it out to you, honey, or to anybody else. Not until I talk to the school board and get this nonsense overturned.

“It means, Amy Anne, that your favorite book was banned from the school library.”