Yes, today I not only got a Nerd Blast (!!) for you all, but also a Book Blitz! Let’s start this week (and Monday) the right way. 🙂

For today’s post I got the usual suspects, about the setting of the book (guest post), and a giveaway! 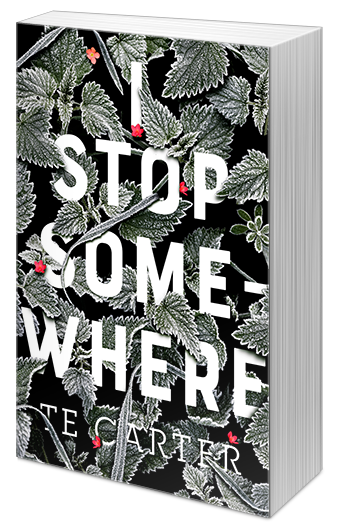 THE LOVELY BONES meets ALL THE RAGE in a searing, heartbreaking contemporary story of a lost teenager, and the town she leaves behind.

Tormented throughout middle school, Ellie begins her freshman year with a new look: she doesn’t need to be popular; she just needs to blend in with the wallpaper.

But then the unthinkable happens and Ellie is trapped after a brutal assault. She wasn’t the first victim and now she watches it happen again and again. She tries to hold on to her happier memories in order to get past the cold days, waiting for someone to find her.

The problem is, no one searches for a girl they never noticed in the first place.

TE Carter’s stirring and visceral debut not only discusses and dismantles rape culture but also makes you slow down and think about what it is to be human.

TE Carter was born in New England and has lived in New England for pretty much her entire life. Throughout her career, she’s done a lot of things, although her passion has always been writing. When she’s not writing, she can generally be found reading classic literature, obsessing over Game of Thrones (she’s one hundred percent Team Lannister), playing Xbox, organizing her comic collection, or binge watching baking competitions. She continues to live in New England with her husband and their two cats.

Guest post time, all about the setting of the book.

When asked about how I choose a setting, it’s hard to answer that exactly. For me, setting is as much a character as the characters themselves. Every story is affected by place and my favorite books include an immersive sense of place within them. When people talk about world building, they’re often thinking fantasy and science fiction, but writers in every genre do a great deal of world building. Whether it’s pulling from an actual place or taking features from real places and turning them into somewhere new, there’s still a process to creating the where and when of a story.

For STOP SOMEWHERE, place was a major part of the story. It’s set in a fictional town in New York called Hollow Oaks. A town in that strange area caught between Upstate and Western NY. I chose that area because the story is also about economic depression and sadly, New York is one of the states in the Northeast that has been affected by the mortgage crisis and recession the worst.
I also knew, as a native New Englander, that my story had to be in a place with seasons. Some people say they don’t care about weather in a story, but when you live in a place like New England, the weather is a story. Seasons create mood and they change people. This is so true in the Northeast. In mid-July, when the sun’s up and the day lasts forever and you can smell someone’s grill going and the ice cream truck is filling the air with its innocent medley, life feels like an opportunity. But come January, as you trek through 14 inches of snow and it’s dark when you leave and when you get home and all you hear and see is silence and darkness, it’s hard to think spring is ever going to happen again. This plays a significant role in my stories, because when you live in this kind of emotionally charged and ever changing place, you start to feel like people mimic seasons themselves.

Hollow Oaks could be any town in theory, but it’s also its unique place and by being so, it has all the elements I needed for the story to work as I wanted it to work. There used to be factories, but over time, they stopped making things at prices people want to pay, and now they’re abandoned. The people who worked there couldn’t afford their homes anymore and now the town is full of empty houses – zombie houses, as they’re called in the news. Abandoned properties where people couldn’t pay the mortgage, but the banks determined weren’t worth the investment in the foreclosure process.

This sets up a power dynamic that allows some people to get away with things they normally couldn’t. Because for the average person, it’s easier to look away if the houses on both sides of yours aren’t rotting. You don’t ask too many questions about the person or people who keep your neighborhood looking pleasant.
Plus there’s winter. The endless despair of long winters that people who live in places with long winters know so well. All of these things culminate in a town that is so burdened that it is destined to break.

My second novel, ALL WE COULD HAVE BEEN (Winter 2019) also deals with poverty and seasons, but differently and therefore, the setting changes. I think when you live somewhere your whole life, it becomes a part of who you are. New England and the Northeast provide so much inspiration – from the beautiful and historic villages to the natural wonders to the sad and broken parts that we don’t know how to keep whole. It’s a treasure for contemporary authors, because we are surrounded by so many stories in the people who live here, too.