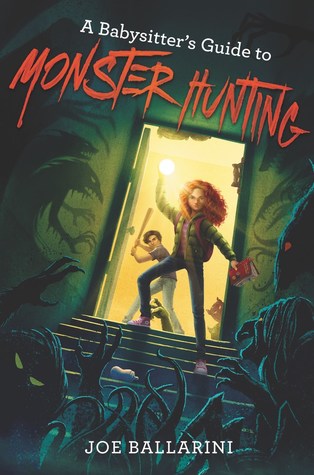 Watch out monsters, watch out Grand Guignol, these babysitters won’t let you get away with your evil, vile plans!

Babysitters, just like cheerleaders, are often found in horror books and movies. Generally though they just die by the dozen in screams and blood. But not these babysitters. Oh no, these babysitters kick some serious butt and aren’t afraid to face creepy monsters. Not if it means saving the kids they are babysitting (and some other kids if needed).

Our main girl is Kelly. She wants to go to some special camp but is out of ideas for how to earn money. She tried a lot of jobs, earned quite a bit of money, but the last stretches are the hardest. Thanks to a friend’s suggestion she ends up as babysitter, and her first job… is with the son of her mother’s boss. And if you think this is just going to be an easy night, think again. Not only do monsters have a party in this night of nights (Halloween, yay!), but the kid is also a tiny bit of a terror, well especially at first. 😛
She quickly finds out that the monsters that Jacob draws… are real. And they are coming for him.
I just adored Kelly, she didn’t go into (instant) superhero mode when she found out what was going on, she didn’t totally give up when Liz kept being a bitch towards her. She just stayed the same, and that was cause for some hilarity as she kept thinking about her crush. Oh hey, I am in the middle of a chase after some great creepy dude, but OMG my crush. And she also keeps thinking about the camp. I loved how quickly Kelly picked up the pace, how she tried to learn and help Liz, help the tiny kids who were being terrorised by scary monsters from down below. Even later she becomes even more awesome, and I also have a feeling, thanks to certain things happening in the later chapters + the ending, that there is much more to Kelly than meets the eye. And I can’t wait for the next book and to hopefully see things happening.

Liz. Ah, Liz. The character I just kept hoping would just get eaten or kidnapped or something else. We do get a background story on her, and why she is so utterly terrible towards people, but really? It didn’t lessen my frustration and my dislike. She kept being dismissive of Kelly, she keeps being a total bitch just because Kelly acts like a normal girl, even in the most scariest of moments. Every time Kelly is crushing or thinking about the camp she gets shot down by Liz immediately in the most bitchiest way. Geez Louis, girl, get your head out of your butt. Kelly is doing her best, but hey, just a few hours ago she was a normal girl, just doing her normal day to day things. You can’t expect everyone to just jump in line and act the way you want them to.
There were a few moments were I did like her, but mostly? Mostly, I just wished she would get eaten.

I loved that this book took place during one day, one night. It really made everything more exciting, they had a time limit, they had to race to make sure everything was going to be OK.

We also have other characters and I quite liked them. Of course it is a little early for me to say more, because we only see them a few times, but I have a feeling that they will become favourites. 🙂

The illustrations are a nice touch, and I love the style and how well it fits with the feeling this book gives. The cat lady was positively scary as hell (I could already envision her with the descriptions given but the image really completed it).

All in all, I can’t wait for the next book. If they are going to do a book per Boogeyman I guess we are in for a ride. There are 7 of them in total (at least from what the babysitters found so far). The next book will be about Serena.

I would highly recommend this fun book. It has some hilarious moments, it is creepy, it has a bit of romance (which fits like a glove), great characters, a fun villain (I know, I know, I shouldn’t like the villains, but I can’t help it).