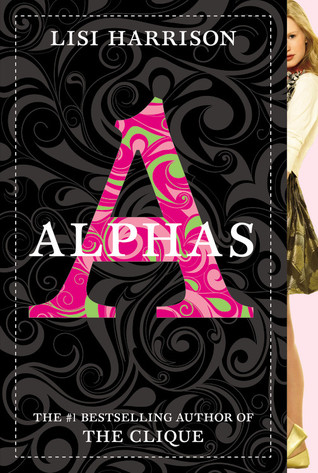 1 island, 1 privileged school of awesomeness, 100 girls, and only one can be the alpha!

This was hilarious, ridiculous, silly, at times a bit too overdramatic, but also brilliant and I couldn’t stop reading (sadly I had to a few times due to real life butting in).

We have 3 girls, and out of those the only one who really got into the school without anything was Skye. Skye was selected for her dancing (btw I think she is awesome, even though she has quite the attitude). The other two girls? Allie got selected because someone famous with her name (just with the letter J instead of A) got picked and she got the letter. Insert lots of make-up, and acting the part. Lastly we have Charlie, she knows Shira, her mom worked for Shira, she build a lot of the things on the island. She got selected.. well, actually she had to beg her life for it and had to give up two of her most loved things in life. Her boyfriend (and the son of Shira), and her mom.

Watch the 3 girls (and their rivals and friends) figure out how the school works, how to get better, and how to survive, and also in Charlie’s case how to fit in. How to become the top alpha in the school.

We see several lessons (I wouldn’t mind those lessons, no maths!), and I had a pretty good image of how the school and the whole place looked, not just because of the included map, but also thanks to the descriptions. It took quite a while before the classes really started, it isn’t until page 108 when we get to see their schedules and see the girls really go to their classes.

Of course there are also boys (why not add more drama to the already existing drama?). I don’t like Darwin though (the main boy for both Charlie and Allie). He was really immature. So your girl dumps you and within hours you lay eyes one the next available hottie and you move on? Wow, I guess Charlie meant nothing to you if you act this shitty. I feel kind of sorry for Allie. Sorry, but I just thought it was ridiculous. He was acting all sad, teary-eyed, but as soon as he sees a new girl he opens up, and the next day he serenades her and gives her a lovely breakfast and acts like he never knew about Charlie. Wow. I may hope he grows up from this silliness.

Alllie was definitely the worst girl in the book. She had some good moments, but generally I thought her attitude towards Charlie was just terrible. She totally snubs her, is mean towards her. Never even caring to maybe think that there is a reason why she dumped Darwin. I also got a bit tired of her thinking back to her ex and her best friend. Plus, unlike the others, she didn’t really work or do anything to earn a place. Most of the book she just bumbles by. And that is a shame. Later on I did start to like her more, but there was one part near the end (tunnel + saying the truth) that had me wanting to shake her. Charlie confided in her, yet she just lied again when asked about things. Bah.

My favourite girl? Skye. Even with her attitude problems she was a sweet and great girl and I could see she wanted nothing more than to improve. Which she did. She grows the most out of the three girls. But she also had a less serious side, and I have to say that I also liked that one.

I disliked Shira. So so much. What she did to Charlie. How she acts towards all the girls. How hurtful she was.

I will be getting the next book in this series as I need to know how it will continue!

And I would recommend this book. It is silly, overdramatic, a bit whut, but it also has some great drama, the school and the surroundings are well-written, and it is just so much fun to read.